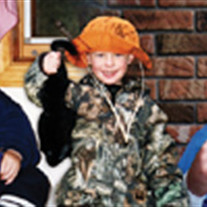 Aaron Claveau had an inquisitive nature and an adventurous spirit that led him to experience things in his young life that most people never will. He was energetic and enjoyed the challenges and excitement found in the outdoors. Aaron truly... View Obituary & Service Information

The family of Aaron Michael Claveau created this Life Tributes page to make it easy to share your memories.

Aaron Claveau had an inquisitive nature and an adventurous spirit...

Send flowers to the Claveau family.