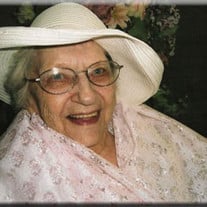 OBITUARY:Alice Elizabeth Damkoehler, aged 91 of Custer, passed away on Tuesday, March 2, 2010 at Tendercare of Ludington. Alice was born on July 27, 1918 in Detroit to Albert and Sophie (Bendicton) Hasenbank, and graduated from Detroit High School. On June 7, 1947, she married Richard Damkoehler in Detroit, and they celebrated 52 years together before Richard preceded her in death on December 29, 1999. Alice was also preceded in death by her parents, and her brother Wesley Hasenbank. Alice and Richard farmed together for many years on South Tuttle Road, and founded the West Shore Rock & Mineral Club. They enjoyed Lapidary, the art of working with precious stones, and making beautiful jewelry from the gems they found. Alice also liked to spend time working with crafts and tending to her flower gardens. She was a longtime member of Redeemer Lutheran Church in Scottville. Alice will be lovingly remembered by her sons Alan (Janet) of Wasilla, Alaska, Douglas (Kathy) of Fountain, Paul (Paula) of Webberville, and Bruce of Grand Rapids; her beloved grandchildren Lisa (Jason) Gray, Chad (Kimberly) Damkoehler, Aaron (Devon) Damkoehler all of Anchorage, Alaska, Kevin (Ella) Damkoehler of Ludington, Jennifer Damkoehler of Grand Rapids, Denise Damkoehler of Kentucky, and Brian Damkoehler of Webberville; her precious great-grandchildren Chelsa, Logan, Carlyna, Caitlyn, Tryston, Isaiah, Jaden, Nathaniel, Brandy, Monica, and Cassie all of Alaska, and Mason, Nelson, and Kole of Ludington; her great, great-grandson Robbie; and her sisters-in-law Ann Hasenbank of Free Soil, and Louise (Richard) Bell of Durango, Colorado.

OBITUARY:Alice Elizabeth Damkoehler, aged 91 of Custer, passed away on Tuesday, March 2, 2010 at Tendercare of Ludington. Alice was born on July 27, 1918 in Detroit to Albert and Sophie (Bendicton) Hasenbank, and graduated from Detroit High... View Obituary & Service Information

The family of Alice Elizabeth Damkoehler created this Life Tributes page to make it easy to share your memories.

Send flowers to the Damkoehler family.