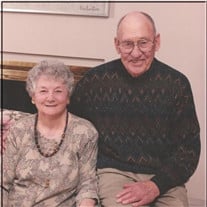 Alice Marie aged 97, and Russell Wayne Saxton Sr. aged 95, went to be with the Lord following 74 years of marriage. Alice was born on November 29, 1918 in Cheboygan, the daughter of John W. and Primrose Fisher. She grew up and attended school in Cheboygan and moved to Ludington when she was 19 with her family. Russell, better known as Wayne, was born in Ludington on November 18, 1920, the son of William G. and Miriam (Erbaugh) Saxton. He grew up in Custer, Scottville, and Ludington, graduating from Ludington High School with the class of 1939. Alice and Wayne met on a blind date in 1941 arranged by Wayne’s cousin Bill Conklin. Wayne told his children that he knew the minute he met Alice that they would marry. On December 24, 1941 they were married in the Saxton home on Loomis Street. A few months later, Wayne was drafted into the US Army, stationed in the Aleutian Islands for 28 months while Alice waited for his return in Ludington. Wayne was attached to an anti-aircraft gun battery and acted as a switchboard operator and line repairman. He was discharged on December 11, 1945 and he and Alice began their long life together. In the early fifties, Wayne went to work for the City of Ludington as Superintendent of Lakeview Cemetery. He was a gentle soul and was good with people. Alice, with Wayne’s help, raised their three children and made time to grow flowers from seed in the greenhouse they built, and was able to plant a beautiful flower garden. She arranged many bouquets which she often sold to the ladies of Epworth. Just before retiring from the City, they purchased a resort on lower Hamlin Lake, where they enjoyed meeting new friends and Wayne enjoyed his love of fishing. It was on Hamlin Lake that he caught his record “tiger Muskie.” After many years of living in Tamarac Village, their health forced them to move to Oceana Medical Care Facility where they lived in the same room until Wayne’s death on February 13, 2016. Alice continued to live there for several months before joining Wayne in heaven on October 20, 2016. Alice died at her daughter’s home in Florida. They were both deeply loved and will be greatly, greatly missed. Wayne and Alice will be lovingly remembered by their daughter Carol (David) Dorrell of Florida, their two sons Russell W. (Kathy) Saxton and Robert L. Saxton all of Ludington; their nine grandchildren Richard T. Rasmussen of Honor, Tracy (Hal) Knight of Georgia, CMSGT Robert (Kandi) Rasmussen of Montana, Laura (John) Popielarski of Lansing, Patrick (Serra) Saxton of Ludington, Sarah Saxton of Georgia, Melissa Saxton also of Georgia, Michael (Naoko) Dorrell of Japan, and Logan Dorrell (friend Alice Vorotchaeva) of San Diego, CA; their eleven great-grandchildren Ashley (Derek) Haines, Evan Knight, Scarlett Rose Popielarski, John Patrick Popielarski, Ashlyn Ann Saxton, Colton, Russell, and Reese Rasmussen, Jay Reese Wright, Ken Dorrell, and Lisa Marie Dorrell. They will also be remembered by two sisters-in-law Beverly Saxton and Carolyn Fisher both of Ludington, and many nieces and nephews. Both Alice and Wayne were the eldest child in their families and were preceded in death by all their siblings Emily Lange, Lina “Dede” Larson, Marion Fisher, Jack Fisher, Charles Fisher, William Saxton, and Virginia Varenhorst. Graveside services will be held for them at 11:00 am on Saturday, November 5th at Lakeview Cemetery, with Rev. Thomas V. Boehne officiating. Those who wish to remember Alice and Wayne with a memorial donation are asked to consider the Alzheimer’s Association, or St. Jude’s Children’s Hospital.

Alice Marie aged 97, and Russell Wayne Saxton Sr. aged 95, went to be with the Lord following 74 years of marriage. Alice was born on November 29, 1918 in Cheboygan, the daughter of John W. and Primrose Fisher. She grew up and attended school... View Obituary & Service Information

The family of Alice Marie & Russell Wayne Saxton created this Life Tributes page to make it easy to share your memories.