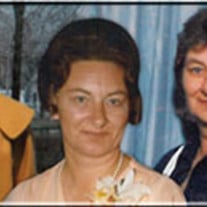 SUE'S OBITUARY:Alice “Sue” Penny, aged 75 of Free Soil passed away on Friday, December 27, 2013 at Spectrum Health – Butterworth Hospital in Grand Rapids. Sue was born on July 12, 1938 in Detroit, the daughter of Earl and Alice (Mellor) Winner, and married Ronald Penny on March 23, 1957 at St. Paul’s Presbyterian Church in Livonia. They celebrated 42 years together before Ronald preceded her in death in 1999. Sue served as a trustee on the Free Soil Village Council for 20 years, and was custodian of the Village Hall for many years. She enjoyed spending time quilting, crocheting, working in her flower gardens, and trying her luck at the casino, but her greatest joy was spent in the company of her beloved Ronald camping and fishing near Indian River every summer. Along with Ronald, Sue was also preceded in death by her parents and her son Kurt in 1987. Sue will be greatly missed by her daughter Sherry and Michael Hasenbank of Free Soil, her son Jeffrey Penny and his companion Alicia Mallison of Manistee, her grandchildren Lyndie (Greg) Stokes, Ryan (Amber) Hasenbank, and Micah Hasenbank all of Free Soil, her great-grandchildren Justin Hasenbank, Kade Stokes, Ronald and Bryanna Hasenbank, Zachary and Sarah Penny, her sister Jeannette (Manuel) Gamboa of Naples, Florida, her sister-in-law Janet (Bill) Little of Loudon, Tennessee, and many nieces and nephews.Funeral services will be held for Sue at 11:00 am on Tuesday, December 31 at the Stephens Funeral Home in Scottville, with her friend Pastor Ray Haner officiating. Burial will take place at Maple Grove Cemetery in Free Soil. Friends may meet with her family for a time of visitation on Monday evening from 6:00 – 8:00 pm, and on Tuesday morning from 10:00 – 11:00 am at the funeral home. Those who wish to make memorial contributions are asked to consider the Free Soil Senior Center or Lakeshore Animal Friends.

The family of Alice ""Sue"" Arlene Penny created this Life Tributes page to make it easy to share your memories.

Send flowers to the Penny family.