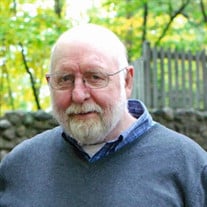 Andrew John Becker age 79 and long time Fountain resident, was surrounded by his loving family when he passed from this world and moved to Heaven on Sunday, May,15, 2022. Andy was born on November 1, 1942 at his family home in Sheridan Township, the son of Andrew and Genevieve (Goodrow) Becker. He attended Fountain Elementary School and graduated from Custer High School with the class of 1961. Andy played just about every sport available in high school and served as his class president in his Senior year. He formed many wonderful friendships with his classmates that continued until his death. Andy joined the US Army soon after graduation and served as a paratrooper in the 101st Airborne. Shortly after completing his service he went to work at Fountain Lumber Co. where he unloaded lumber as it arrived by train and delivered coal and building materials throughout the area.   Andy married the love of his life Catherine Mazurek on Sept, 8, 1973. In 1974 he and Cathy purchased the Fountain Lumber Co, which he ran until his first retirement in 2008 and his second retirement in 2010. Handy Andy loved every day he spent in the lumberyard, helping his customers solve their construction and repair problems. He pored over catalogs and spent hours on the phone tracking down hard to find items. He loved nothing better than being able to call them to say “I found what you need, and I can have it here for you on Friday.” Andy was always willing to lend a helping hand whether that meant making a home repair, serving on the Fountain Fire Department or simply mowing someone’s lawn. He enjoyed hunting, playing fast pitch softball, golfing, playing cards and camping with his friends. He loved fiercely and nothing was more important to him than simply spending time with family, especially his grandchildren   Andy was preceded in death by his parents and his older brother Edward. Along with his wife Cathy, he will be lovingly remembered by his children Douglas(Shirin) Becker of Holland, and Carolyn(Cory) Sutherby of Grand Rapids; his beloved grandchildren Andrew, Genevieve, Arianna and Addison; his sisters Mary Becker, and Linda(Ron) Caquelin; his brother Stanley; several cousins, his treasured nieces and nephews, and many valued friends.   Funeral services will be held for Andy at 11:00 am on Friday, May 20 at Wyman Funeral &Cremation Services in Scottville. Friends may visit with his family on Thursday evening from 7:00 - 9:00 pm, and on Friday morning from 10:00 am until time of services all at the funeral home.   His family has asked that memorial contributions be made to the Michael J. Fox Parkinson’s Foundation, Hospice of Michigan, or to the Fountain Fire Department.

Andrew John Becker age 79 and long time Fountain resident, was surrounded by his loving family when he passed from this world and moved to Heaven on Sunday, May,15, 2022. Andy was born on November 1, 1942 at his family home in Sheridan Township,... View Obituary & Service Information

The family of Andrew John Becker created this Life Tributes page to make it easy to share your memories.

Send flowers to the Becker family.