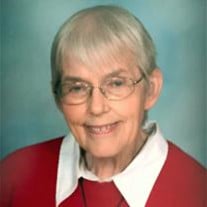 Ardyce Jean Wolfe aged 88 of Scottville passed away on Monday, October 7, 2019. Ardyce was born in Muskegon on June 2, 1931, the daughter of William and Myrtle Peterson. She grew up in Muskegon and graduated from Muskegon High School in 1949. Ardyce continued her education earned a teaching certificate from Muskegon Community College and taught at a one room country school in Ravenna before venturing off to Central Michigan University to complete her teaching degree. While attending CMU, she met her future husband Richard Wolfe. Her dear friend and roommate, Marilyn, who was Richard’s sister, introduced them to each other. Ardyce and Richard married and settled on their Scottville farm in 1955 where they celebrated 42 years together before Richard preceded her in death in 1997. Ardyce truly loved the farm life where she cooked, gardened, sewed and raised her family. Ardyce also continued to teach at various schools in her early years of marriage. Being of strong Christian faith, she was an active member of the Scottville United Methodist church for over 60 years. Ardyce will be lovingly remembered by her three children, Karen Markov and husband Paul of Ludington, Carl Wolfe and wife Jean of Maryland, and Amy Haselhuhn and husband Howard of Brighton. She will also be remembered by seven grandchildren Sandra (Cody) Shaffer, Ryan (Carie) Hieronymous, Jacob (Katie) Wolfe, Jhia Manaig, Howard (Amberlee) Haselhuhn, Laura (Patrick) Morris, and Stephanie Haselhuhn; two great-granddaughters Nora and Hanna Haselhuhn; her sister Amy Hodson of Muskegon; along with several sisters in law, a brother in law, and numerous nieces and nephews. Along with her husband Richard, Ardyce was also preceded in death by her parents, brothers Robert and Burton, and sisters Clarice and Tereasa. Ardyce will be remembered for being a sweet and caring person. She loved to tell stories of her childhood, cook food for family gatherings, drink coffee with family and friends, play Scrabble and go to church. She touched many lives with her generosity. She will be greatly missed by family, friends and neighbors. Funeral services will be held for Ardyce at 11:00 am on Tuesday, October 15 at Wyman Funeral & Cremation Services in Scottville with her Pastor, Rev. Rick Hodgeson officiating. Friends may greet her family on Tuesday morning from 10:00 am until time of services at the funeral home. Burial will take place at Sugar Grove Cemetery next to her beloved Richard. Those who wish to remember Ardyce with a memorial donation are asked to consider either the Scottville United Methodist Church or Hospice of Michigan.

Ardyce Jean Wolfe aged 88 of Scottville passed away on Monday, October 7, 2019. Ardyce was born in Muskegon on June 2, 1931, the daughter of William and Myrtle Peterson. She grew up in Muskegon and graduated from Muskegon High School in 1949.... View Obituary & Service Information

The family of Ardyce J. Wolfe created this Life Tributes page to make it easy to share your memories.

Ardyce Jean Wolfe aged 88 of Scottville passed away on Monday,...

Send flowers to the Wolfe family.