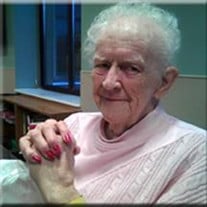 Barbara Ruth White, aged 82 of Scottville, passed away on Wednesday, January 21, 2015 in Mt. Pleasant. Barb was born on May 4, 1932 in Muskegon, the daughter of Charles and Gladys (Morton) Cutler, and graduated from Pentwater High School as the Salutatorian of the 1950 class. She married James “Jimmy” White on March 23, 1951 in Pentwater, and they celebrated over 50 years together. Jimmy preceded her in death in 2005. Barb was also preceded in death by her infant daughters Ann Lee and Ruth Marie, her parents, her sisters Ardean Hartsuiker, and Kathryn Lovell, and her brother Douglas Cutler. Jimmy and Barb were great ambassadors of Scottville. Together they were involved in many activities, festivals, and organizations throughout the city. Barb was always faithfully supporting Jimmy when he served as fire chief, Mayor, and with the Optimist Club, and she volunteered countless hours during Harvest Festival, in the Optimist Popcorn Wagon, with the kids at school and in Girl Scouts, often serving as the taxi driver for them and their friends. Jimmy operated Service Stations in the community, and Barb always took care of the books for him. Together they operated the “White House Restaurant” in downtown Scottville, and taught many kids the value of good hard work. At their home on Thomas Street, their pool was the unofficial city pool, open to all kids in the neighborhood as long as they obeyed the rules and were respectful to each other. They were recognized as Citizens of the Year for all their efforts for Scottville. Barb made countless cakes for graduations, weddings, and birthdays for “her Scottville kids” and blessed them with crocheted Afghans and dolls when they had children of their own. In addition to their businesses, Barb formerly worked for the Four Star Theater, Wesco, and Stephens Funeral Home. She enjoyed bowling on several leagues in the area, rarely missed a Scottville Clown Band concert, and was very active at the Scottville Senior Center. Barb will be lovingly remembered by her children Sandi (James) Williams of Scottville, Gladys (James) McDonald of Mt. Pleasant, Etta (Gerald) Simula of Ishpeming, Shirley (Carl) Ewing of Pentwater, Randy (DeLynn) White of Scottville, 12 grandchildren Michelle Paul, Chara Parker, Jeremiah Kramer, Joanna Bancroft, Tammy Simula, Barbara Staffen, Amber Johnson, Autumn Vandusen, Ariel White, Steve, Jennifer, and Timothy Simula, 10 great-grandchildren, her brother Charles (Lois) Cutler of Hart, her sister Beatrice (Everet) Horton of Pentwater, her brother-in-law William Lovell of Pentwater, her sister-in-law Mary Worthington of Ludington, and many nieces, nephews, cousins, friends at the Senior Center, and countless children whose lives she touched. A Celebration of Barb’s life will be held the spring with burial to follow at Brookside Cemetery in Scottville. Those who wish to make gifts in Barb’s memory are asked to consider the Scottville Senior Center, or the Scottville Clown Band.

Barbara Ruth White, aged 82 of Scottville, passed away on Wednesday, January 21, 2015 in Mt. Pleasant. Barb was born on May 4, 1932 in Muskegon, the daughter of Charles and Gladys (Morton) Cutler, and graduated from Pentwater High School as... View Obituary & Service Information

The family of Barb White created this Life Tributes page to make it easy to share your memories.

Barbara Ruth White, aged 82 of Scottville, passed away on Wednesday,...

Send flowers to the White family.