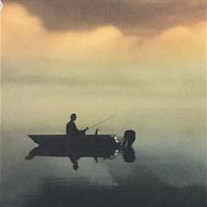 Bernard James Kamphuis aged 77, passed away on Thursday, June 22, 2017 at his home on Emerson Lake in Branch. Bernard was born on December 10, 1939 in Zeeland, the son of Nicholas and Frances (Bareman) Kamphuis, and married Betty Lou Kraai on May 2, 1959 at Third Christian Reformed Church in Zeeland, celebrating 58 years by each other’s side. Bernard operated the Kamphuis Brothers Construction Company in Holland with his brother Jerry for many years before retiring to his home on Emerson Lake, where he was able to enjoy his love of fishing. Bernard will be greatly missed by his wife Betty; his children Steven Kamphuis and wife Lauri of Grand Haven, Kevin Kamphuis and wife Nancy of Hudsonville, and Kari Vander Warf and husband Todd of Chattanooga, TN; his grandchildren Alicia & Jeff Kouw and children Nicholas, Johnathan, and Jacob; Allison Duran and children Dominic Kamphuis, Destiny, Anthony, and Isabella; Kayleigh and William Bruinsma and children Dirk, Henry, and Levi; Emily and Jon Bluml, and Chad Kamphuis; Nicole and Andrew Kiel and son Gerrit; Amanda and Jamie Mott and children Kaiden and Alexa; Kelsi and Heath Lisk and sons Braxton and Nolan and Becki VanderWarf. Bernard will also be remembered by his brothers Bud (Beth) Kamphuis, Frank Kamphuis, and Jerry (Dottie) Kamphuis; his sisters-in-law Glady Bos, Crystal Baum, Norrie Bennett, and Joan Zwagerman; his brothers-in-law Cliff (Darlene) Kraai, Bob (Vada) Kraai, and Jerry (Delores) Kraai; and numerous nieces and nephews. Bernard was preceded in death by his parents, his infant son Kevin Jay in 1961, and his sister Elizabeth VanKluyve. Bernard and Betty were faithful members of Evergreen Covenant Church in Branch where a Memorial Service will be held at 11:30 am on Monday, June 26 with his pastor, Rev. Keith Foisy officiating. Friends may meet with his family prior to the service from 10:00 – 11:30 am at the church. Those who wish to remember Bernard with a memorial donation are asked to consider St. Jude Children’s Hospital, or DLEA, PO Box 1786, Ocean Springs, MS 39566.

Bernard James Kamphuis aged 77, passed away on Thursday, June 22, 2017 at his home on Emerson Lake in Branch. Bernard was born on December 10, 1939 in Zeeland, the son of Nicholas and Frances (Bareman) Kamphuis, and married Betty Lou Kraai... View Obituary & Service Information

The family of Bernard James Kamphuis created this Life Tributes page to make it easy to share your memories.

Send flowers to the Kamphuis family.