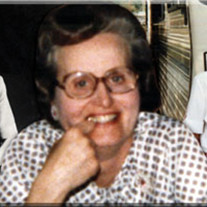 BERNICE'S LIFE STORY:From the blessings of love, Bernice Durfee lived a life of faith. From that very faith, she persevered through some enduring heartaches, but in the end, they gave her unending strength, a feisty demeanor and an independent... View Obituary & Service Information

The family of Bernice Elnora Durfee created this Life Tributes page to make it easy to share your memories.

Send flowers to the Durfee family.