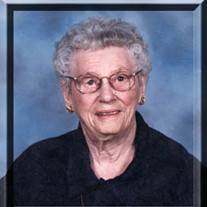 OBITUARY:Bernice L. Lundquist, aged 93 of Custer, passed away on Monday, May 3, 2010 at Tendercare of Ludington. Bernice was born on December 27, 1916 in Ludington to Edward and Mary (Whyte) Hutchison, and attended Ludington High School. On September 25, 1937 she married Clifford Lundquist in Kent City, and they celebrated 53 years together before Clifford preceded her in death on November 5, 1990. She was also preceded in death by her parents; her stepmother Ruby Burns; her son Leroy Lundquist on May 9, 2001; her daughter-in-law Betty Lundquist on November 27, 2008; her granddaughter Lori Lynn Lundquist; 2 sisters, and 5 brothers. Bernice was a longtime member of the Scottville United Methodist Church, and the Custer Gold Bar VFW Post 5096 Ladies Auxiliary. She worked 25 years for Carrom Company, before retiring in 1979 from Memorial Medical Center in Ludington where she worked in Housekeeping. Bernice loved her family and always looked forward to being together at family reunions. She enjoyed playing bingo and cards, especially pinochle, and knitted beautiful afghans for many members of her family. She will be remembered for her quit wit and how she loved to share jokes with everyone. Bernice will be greatly missed by her sons Donald Lundquist, and Richard (Janet) Lundquist both of Custer, and Ronald (Marilyn) Lundquist of Winterhaven, Florida; her daughter Mary Nichols of Wyoming, MI; her daughter-in-law Carol Lundquist of Lamont, MI; 13 grandchildren; 27 great-grandchildren; her sisters Lillian Shannon of Pittsburg, PA, Viola Gutschke of Ludington, and Robina (Gustav) Storm of Manistee; her brother Leo (Dixie) Hutchison of Ludington; her sister-in-law Betty Lundquist of Scottville; and numerous nieces and nephews.

OBITUARY:Bernice L. Lundquist, aged 93 of Custer, passed away on Monday, May 3, 2010 at Tendercare of Ludington. Bernice was born on December 27, 1916 in Ludington to Edward and Mary (Whyte) Hutchison, and attended Ludington High School. On... View Obituary & Service Information

The family of Bernice Louise Lundquist created this Life Tributes page to make it easy to share your memories.

Send flowers to the Lundquist family.