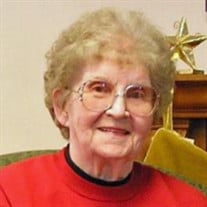 Betty M. (Conrad) Gallie aged 100, passed away from complication of Alzheimer’s disease on April 28, 2020 at Oakview Medical Care Facility in Ludington where she had been a resident the past 13 years. Betty was born on July 12, 1919 in Amber Township of Mason County, the daughter of Archie and Mildred (Cameron) Conrad. She attended Rickey School, located next to the family farm on Conrad Road, and graduated from Scottville High School with the class of 1936. Following graduation, she attended the Muskegon School of Business and worked for a few years at the Mason County Soil Conservation District in Scottville. On June 16, 1939 she married Russell F. Gallie, and shortly after, they moved to Muskegon where she worked for Michigan Bell Telephone. Betty was a wonderful mother, grandmother, and homemaker. Growing up on a farm gave her a love of nature, a love of gardening and a dedication to her flowers, which were always beautiful. She was a gentle, kind person with a beautiful smile and was always putting others before herself. Betty loved having visitors and there was always a meal or dessert when they stopped by. In later years, Betty and Russ loved taking trips to the western stated, camping in the Upper Peninsula, and visiting family and friends in other states. Betty lived during many historic events in her lifetime, beginning with the first pandemic and most recently, the second pandemic. Betty is survived by her children Sandie Gallie (Bandock) Wisman of Spangle, WA, and James (Loretta) Gallie of Scottville, and her daughter-in-law Karen Gallie of Muskegon. She will also be greatly missed by her grandchildren Joseph (Staci) Bandock, Jerry Bandock, Jill Bandock, and Jaclyn Bandock all of Washington, Lisa (Corey) Allard of Muskegon, James (Andrea) Gallie and Tracey (Jeffrey) Barnett of Scottville; her great-grandchildren Nicholas (Kendra) Bandock, Nicole Bandock, and Blair Bartley of Washington, Hayden and Cameron Allard of Muskegon, Chase Barnett of Austin, TX, Riley Barnett of Grand Rapids, and Sadie Barnett of Scottville; her great, great-grandchildren Hunter Bandock and Landen Bower both of Washington. She is also survived by her sister Mary Lou (Conrad) Schulz of Grand Rapids, her sister-in-law Delores (Lolly Gallie) DiPiazza of Covington, LA, and numerous nieces and nephews. Betty was preceded in death by her first husband Russell F. Gallie, second husband Floyd Wood, her son Larry Gallie, her granddaughter Carrie Ann Gallie, her grandson Daniel Gallie, her brother Robert (Ann) Conrad, her brothers-in-law Donald Schulz, Donald (Irene) Gallie, and Andrew DiPiazza, and her sister-in-law Doreen (Jerome) VanAelst. Betty’s family would like to especially thank the wonderful and caring staff at Oakview Medical Care Facility for taking such great care of Betty over the last 13 years. According to her wishes, Betty has been cremated and a graveside service will be held for her at a later date this summer at Mona View Cemetery in Muskegon Heights. Those who wish to remember Betty with a memorial donation are asked to consider either Oakview Medical Care Facility in Ludington, or the Alzheimer’s Association.

Betty M. (Conrad) Gallie aged 100, passed away from complication of Alzheimer&#8217;s disease on April 28, 2020 at Oakview Medical Care Facility in Ludington where she had been a resident the past 13 years. Betty was born on July 12, 1919 in... View Obituary & Service Information

The family of Betty M. Gallie (Wood) created this Life Tributes page to make it easy to share your memories.

Send flowers to the Gallie family.