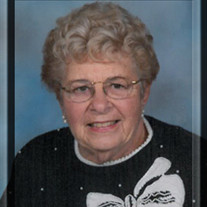 Betty L. Lundquist, aged 93 of Scottville, passed away on Sunday, April 20, 2014 Easter morning at Oakview Medical Care Facility in Ludington. Betty was born in Ludington on April 1, 1921, the daughter of Maurice and Mary (Hutchinson) LaBar. She grew up on the family farm just outside of Ludington, graduated from Ludington High School with the class of 1939, and has been active and enjoyed the many class reunions she attended throughout the years. On August 1, 1939 she married Carl Emery Lundquist, and they celebrated 25 years together. Carl operated Lundquist Furniture in downtown Scottville. Betty has been retired for over 33 years from the store, but we should not forget the business leader she became after Carl preceded her in death in 1964. She took over operating the family business following his death, at a time when she did not know much about the business. Not many women were successful entrepreneurs like she was in the 1960’s. Her hard work and vision of a bigger and better furniture store made Lundquist Furniture what it is today. Alongside running the business, Betty made it a priority to give back to her community. No matter how hard times would get, she felt it was her responsibility to give back to the community. That tradition still stands today. In retirement, Betty loved to travel with her family and good friends. Some of her favorite memories were from trips made to Europe, Branson, MO, and Florida. Her hobbies included gardening, crafts, ceramics, golfing and knowing her way around the kitchen. Also Betty was an avid follower of the Detroit Tigers, and her favorite Tiger was former manager Jim Leyland.She relished all the time spent with her daughter and best friend, Karen Ross. Family was the love of her life. Betty never missed an activity or an event in which any member of the family participated, including the grandkids and great-grandkids. You would always see her there in full support. She taught everyone she met that family is EVERYTHING! Her philosophy was “Always be there for them no matter the situation.” Her grandkids learned this quickly and renamed her O’Great.Betty was a longtime member of Lakeside Links, the Literary Club, and the Scottville Chamber of Commerce. She also was an active member of the Scottville United Methodist Church. Many will remember Betty as the gracious hostess to the Scottville Clown Band on the corner of First & Scott Street during the Annual Scottville Harvest Festival Parade.Along with her husband Carl, Betty was preceded in death by her daughter Sharon Gaye Lundquist (Karen’s twin sister), her son-in-law Ken Ross, and her sister-in-law Bernice Lundquist.She will be greatly missed by her daughter Karen Ross of Scottville, her son Brian and Sheryl Lundquist of Ludington, three grandsons Kelly and Robin Ross of Atlanta, Kyle and Diana Ross of Honor, and Trent Lundquist of Ludington, her granddaughter Tyler Lundquist of Pittsburg, PA, two great-grandsons Jacob Ross of Atlanta, and Austin Ross of Honor, one great-granddaughter Aleiya Ross of Honor, and many nieces, nephews, and friends. Funeral services will be held for Betty at 3:00 pm on Wednesday, April 23 at the Scottville United Methodist Church, with her pastor, Rev. Jack Conklin officiating. Burial will follow at Brookside Cemetery. Friends may meet with her family for a time of visitation on Wednesday from 1:00 – 3:00 pm at the church. Memorial contributions may be made to the Scottville United Methodist Church in memory of Betty. The family would like to thank the staff of Sutter Living Center and Oakview Medical Care Facility for the wonderful care given to Betty during her stay.

The family of Betty Lundquist created this Life Tributes page to make it easy to share your memories.

Betty L. Lundquist, aged 93 of Scottville, passed away on Sunday,...

Send flowers to the Lundquist family.