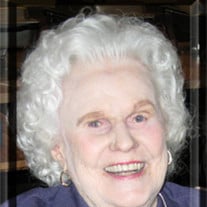 OBITUARY:Mrs. Betty Smith, 90, of Scottville, passed away peacefully on Thursday, January 17, 2013 at Memorial Medical Center of Ludington. Betty was born November 18, 1922 in Chicago, Illinois to Sylvester & Molly (Tunkis) Kamarauskas, who had emigrated from Lithuania. Betty had older siblings who had been born in Lithuania, but all had tragically fallen victim to the flu pandemic that spread through Europe in 1918 before her mother had come to America. Her parents moved from Chicago to Mason County when she was just a toddler and Betty spent the rest of her life in the area. She attended the Sugar Grove School, and graduated with the class of 1942 from Scottville High School. She met her loving husband, Robert J. Smith, of Smith & Eddy Insurance, and married him on May 17, 1947 at St. Mary’s Catholic Church in Custer. Bob’s agency grew and moved a few times in downtown Scottville, and Betty supported him in his many endeavors and activities.Betty’s joy in life was her family. Together she and Bob raised their family and served their community, passing along a legacy of love and friendship. Betty was a wonderful cook; her crepes and chocolate cake were second to none. Her children and grandchildren knew every day how much she loved and cared for them. Celebrating her 90th birthday in November of 2012 was a blessing to them all.Betty was preceded in death by her parents and her siblings, her son Duane and her husband Robert. She will be lovingly remembered by her children Diane (Gary) Jensen of Eden, UT, Robert A. (Patty) Smith of Custer, and Richard (Lori) Smith of Bloomington, IL; her grandchildren Jeffrey Anderson of Honolulu, HI, Stacy Boyles (Dave Gelardi) of Linden, MI, Douglas (Lauren) Jensen of Flat Rock, MI, Lauren Rasmussen of Kalamazoo, Sheryl (Adam) McVicker of Grand Rapids, Kelly Smith of Scottville, Nicole (Brandon) Neblett of Farmingdale, NY, Lauren (Don) Harley III of Holt, MI, Robert Scott Smith of Custer and Augusta “Gussy” Morse; her great grandchildren Elizabeth and Luke Jensen, Ethan Rasmussen, Donald Edward Harley IV, Alexis Harley and Bryce Carter Neblett.A memorial service will be held for Betty at 2:00 pm on Sunday, January 20, 2013 at Stephens Funeral Home in Scottville, with Rev. Anton Tran officiating. Memorial contributions may be directed to Hospice of Michigan-Mason County or to Shriners Hospitals for Children.

The family of Betty Smith created this Life Tributes page to make it easy to share your memories.