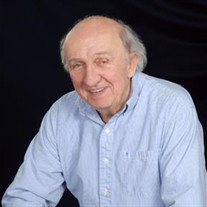 Bruce William Miller was born June 21, 1939 in Newark, New Jersey, the son of Minnie (Hall) and Ernest Miller, and grew up in a multi-generational household in Irvington, NJ. After graduating from Frank H. Morrell High School in 1957, he moved with his family to Florida where he found work as a private chauffeur. It was in Florida that Bruce gave his life to Christ. He would eventually start college in Grand Rapids at Kuyper College (formerly Reformed Bible Institute). It was there that he met his future; Colleen Bonnema. The two were married at the College on May 31, 1968. Following their wedding, they took two missionary trips, one to Mexico, and the other to Scotland where their first child was born. Once back in the states, Bruce began his ministry - preaching at Sugar Ridge Church of the Brethren. He also drove school bus for Mason County Eastern Schools and decided to become a full time truck driver. After a long career, he retired from Mason County Fruit Packers. Bruce was an active member of the Mason County Reformed Church where he served as a deacon, elder, occasionally preached, taught Sunday school, and wrote articles for the crossroads. Recently, Bruce enjoyed directing the bell choir at the Scottville United Methodist Church. He volunteered with HELP Ministry, drove for the Scottville Senior Center, participated in BINGO at the Optimist Club, and was member of the Old Car Club. He also enjoyed participating with his wife and friends in Trivia Night as a member of team Avengers. Bruce joined the Scottville Clown Band in 1980 and became a Life Member. He was a supreme clarinetist who became known for taking the ride on "When the Saints Go Marching In" Playing his horn and joking with fellow clowns gave him great joy and made him beloved in the band. Everywhere he went he made friends easily and his warmth and laughter will be missed by many. Bruce was preceded by his parents and his only sibling Ernest D. (Janice) Miller. He is survived by his wife Colleen with whom he shared 50 years of marriage, and will be greatly missed by his children Amanda (David) McAuliffe of Katy, TX; David (Tracy) Miller of San Diego, CA; Jeffrey (Heather) Miller of Cincinnati, OH; and Jeremy (Jennifer) Miller of Cullman, AL. Among his brood were nine grandchildren: Michael and John McAuliffe, Breanna and Chloe, Solomon, Alexander, Kimberly, Madison and Tiffany Miller. A Celebration of Bruce’s Life & Ministry will be held at 6:00 pm on Tuesday, October 16 at Mason County Reformed Church. Friends may meet with his family for a time of visitation on Tuesday at the church from 5:00 – 6:00 and immediately following the services. Those who wish to remember Bruce with a memorial donation are asked to consider Mason County Reformed Church.

Bruce William Miller was born June 21, 1939 in Newark, New Jersey, the son of Minnie (Hall) and Ernest Miller, and grew up in a multi-generational household in Irvington, NJ. After graduating from Frank H. Morrell High School in 1957, he moved... View Obituary & Service Information

The family of Bruce W. Miller created this Life Tributes page to make it easy to share your memories.

Send flowers to the Miller family.