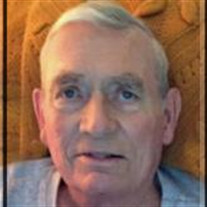 Carl Robert Berndt, aged 77 of Free Soil passed away on Friday, October 23, 2015 at his home. Carl was born on February 25, 1938 in Manistee, the son of Carl Gustav and Sophia Anna (Grothaus) Berndt. He graduated from Scottville High School with the class of 1956. On June 13, 1959, he married Janice Louise Thurow at St. John’s Lutheran Church in Ludington, and they have celebrated 56 blessed years together. Carl served for a time with the U.S. Army Reserves and retired from Packaging Corporation of America in Manistee in 1997, where he worked for 40 years. He was a faithful member of Our Savior Lutheran Church in Scottville, serving as the Council President during the time when the church was being built. He was also a member of the Scottville Optimist Club, and formerly served as President of Filer City Credit Union. Carl played, coached, and managed Little League baseball and men’s softball teams in the area for many years. He and Janice enjoyed camping, often serving as a campground host . As a sportsman, Carl always looked forward to hunting, ice fishing, and snowmobiling, and also enjoyed woodworking, sharing his crafts with his family. Carl loved his family, supporting them in their many activities, traveling with Janice and sharing a dance whenever possible. He was preceded in death by his parents Carl & Sophia, his sons Larry in 1959, and Gary in 1961, Janice’s parents Carl & Marie (Bentz) Thurow, his brothers-in-law Carl Lidke and David Flickinger, his sister-in-law Edith (Thurow) & Richard Patterson, and his niece Holly Lidke. Carl will be greatly missed by his wife Janice, his children Cindy Sneller and husband Reed of Hamilton, Roger Berndt and wife Sherry of Scottville, Dale Berndt and wife Stasi of Free Soil, his brother Curtiss Berndt and wife RuthAnn of Free Soil, his sisters-in-law Karleen Flickinger of Fountain, and Joyce McClintock and husband John of Florida, his grandchildren Julie Knudsen and husband Kent, Gary and Peter Berndt, Amanda Palmer and husband Travis, Pauline Manning and husband Brandon, Diamond Berndt, Troy Sneller, Kevin and Kelsie Stiver, his great-grandchildren Brianna and Braydon Palmer, Karson Hansen, Kayden Stiver, and Kole Marcus, and many nieces and nephews. Funeral services will be held for Carl at 11:00 am on Tuesday, October 27 at Our Savior Lutheran Church in Scottville with Rev. James Schroeder and Pastor John Hansen officiating. Burial will take place at Trinity Lutheran Cemetery in Manistee. Friends may meet with his family for a time of visitation on Monday evening from 6:00 – 8:00 pm at Wyman Funeral & Cremation Services – Stephens Funeral Home in Scottville, and on Tuesday from 10:00 am until time of services at the church. Those who wish to remember Carl with a memorial contribution are asked to consider Our Savior Lutheran Church.

Carl Robert Berndt, aged 77 of Free Soil passed away on Friday, October 23, 2015 at his home. Carl was born on February 25, 1938 in Manistee, the son of Carl Gustav and Sophia Anna (Grothaus) Berndt. He graduated from Scottville High School... View Obituary & Service Information

The family of Carl Robert Berndt created this Life Tributes page to make it easy to share your memories.

Send flowers to the Berndt family.