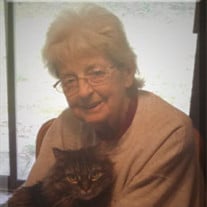 CAROL'S OBITUARY:Carol S. Bailey, aged 77 of Branch, passed away on Saturday, August 24, 2013. Carol was born on December 5, 1935 in Battle Creek, the daughter of William G. and Doris E. (Sisson) Brooks, and graduated from Battle Creek Central High School. In 1954 she married Richard R. Gerould, and later married Donald Bailey on September 3, 1967. Donald preceded her in death in 1990. She was also preceded in death by her parents, and her stepson John “Mick” Bailey.Following Don’s passing, Carol worked as a Bookkeeper for Stokely’s in Scottville and later for Master Muffler in Ludington until her health would no longer allow. She enjoyed watching baseball, especially the Tigers, and also NASCAR. She loved to cook and can fresh fruits and vegetables, and her cookies were enjoyed by many. Through the years she blessed her family and friends with crocheted Afghans, and always had a smile no matter what adversity life through at her. After a visit with Carol, you always felt uplifted by her positive spirit.Carol will be greatly missed by her children Rodney A. Gerould of Branch, Richard F. Gerould of Kalamazoo, and Tammy S. Bailey (Mike Nummerdor) of Custer, her stepchildren Rachelle (Rick) Jenkins of Louisville, KY, Kimberly (Jack) Porlier of Cheyenne, WY, and Donald Bailey of Traverse City, 16 grandchildren, several great-grandchildren, her brother George (Jan) Brooks of Battle Creek, and her beloved cat Kiki.Funeral services will be held for Carol at 11:00 AM on Friday, August 30 at the Bachelor Evangelical Covenant Church with Rev. Norman Letsinger officiating. Friends may visit with her family on Friday morning from 10:00 AM until time of services at the church. Those who wish to make a memorial contribution are asked to consider the American Cancer Society – Relay for Life, or the American Diabetes Association.

The family of Carol Susan Bailey created this Life Tributes page to make it easy to share your memories.

Send flowers to the Bailey family.