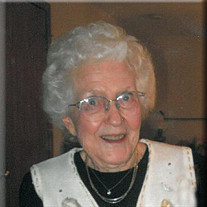 Carol Virginia Goff aged 91 of Scottville passed away on December 25, 2014 at Tendercare of Ludington. Carol was born on December 25, 1923 in Chicago, the daughter of Arnold A. and Edna R. (Freeman) Andersen, and moved to Sherman Township, Mason County in 1931. She attended Lincoln River School and graduated from Scottville High School with the class of 1941. Carol furthered her education at Davenport McLaughlin Business School and Grand Rapids Junior College earning an Associate’s Degree. She enlisted in the United States Marine Corps Women’s Reserve in 1944, where she served her country during World War II at Cherry Point, North Carolina Air Station as a secretary. Upon her discharge in 1946, Carol had earned the rating of Sergeant. When Carol returned home from her service, she met Charles R. Goff, also a veteran from Custer, and they married on April 26, 1947 and celebrated 64 years together before Charles preceded her in death in 2011. Carol worked as a secretary for a variety of employers through the years : the Mason County Soil Conservation, Smith & Eddy Insurance, as an Aide at Fountain School, Five CAP of Mason County, West Shore Community College, and finally at the Mason-Lake ISD. She also served on multiple boards including the Paulina Stearns Auxiliary, Mason County Historical Society, Mason-Lake ISD Board, Mason County District Library Board, and the Michigan Child Study Association Executive Board for seven years and serving as president for 2 years. She was a longtime member of Emmanuel Lutheran Church in Ludington, serving on the church council and was active in many of the women’s organizations of the church. Carol and Charles lived and farmed 40 years on Reek Road in Custer before moving to Scottville in 1989. They enjoyed traveling around the world and spending time with their family. Carol loved to entertain and always kept current on local and world civics and politics. Along with her husband Charles, Carol was preceded in death by her parents. She will be lovingly remembered by her daughter Leah and Larry Braun of Harbor Beach, her son Bradley and Judy Goff of Custer, her sister Marilyn and Don Villadsen of Freesoil, 8 grandchildren, several great-grandchildren, and many nieces, nephews, and cousins. Funeral services will be held for Carol at 11:00 am on Tuesday, December 30 at the Emmanuel Lutheran Church with Rev. Mick Shriver and Rev. Wayne Buskirk officiating. Burial will take place at Grant Township Cemetery at a later date. Friends may meet with Carol’s family for a time of visitation on Tuesday morning from 10:00 – 11:00 am at the church. Those who wish to make contributions are asked to consider Emmanuel Lutheran Church in her memory.

Carol Virginia Goff aged 91 of Scottville passed away on December 25, 2014 at Tendercare of Ludington. Carol was born on December 25, 1923 in Chicago, the daughter of Arnold A. and Edna R. (Freeman) Andersen, and moved to Sherman Township,... View Obituary & Service Information

The family of Carol Virginia Goff created this Life Tributes page to make it easy to share your memories.

Carol Virginia Goff aged 91 of Scottville passed away on December...

Send flowers to the Goff family.