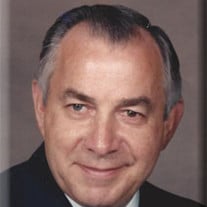 Charles L. “Chuck” Clark, aged 85, longtime resident of Scottville, died peacefully at his home on Sunday, March 2, 2014. Chuck was born on November 5, 1928 in Muskegon, the middle child of seven children born to William Roy and Agnes (Mahoney) Clark. As a boy, Chuck spent many summers in the Scottville area working on his uncle Fred Harjes’ farm, and formed many lasting friendships. Chuck was a veteran of World War II where he served as a paratrooper with the Army, and upon his discharge in 1948, returned to the Scottville area which he grew to love so much as a boy. In 1950, he married Darlene Harrell, and together they were the parents of Chuck Jr., Julie, Jean, Lorie, and Natalie. He later married Joyce Belke in 1985 at Our Savior Lutheran Church, which added three more children into his life - Lisa, Mark, and Heidi. Chuck worked as a Milkman for Hansen’s Dairy for 19 years where he was loved by his customers and especially their children. He would often give rides to the kids while on his route. Chuck felt a different calling in life and began a career in Real Estate working with Elliott Realtors, which later became Klemm – Elliott Realtors. Chuck built his reputation on honesty and helpfulness, and in 1986 was one of the founding partners of Carriage House Real Estate. After a long and respected career, and three attempted retirements, Chuck finally retired after 33 years as a Realtor in the West Michigan area. Not one to sit around, he soon began working for West Shore Bank as a Courier until his health would no longer allow.Chuck was a charter member of Our Savior Lutheran Church where he formerly served as an Elder and as a youth leader when his children were young. He was also very active in the community and was a life member of the Scottville Optimist Club, serving as Club President in 1975, and again in 2001. In 2002, Chuck was honored as Optimist of the Year in recognition for dedication and willingness to step forward whenever a need arose. One of the traditions he enjoyed was taking care of the flags in the downtown business district every year. Not a fisherman or hunter, Chuck could often be found engaged in a good game of cards, mostly setback. Always a people person, card playing introduced him to many good friends, and he was in high demand to be their partner. Chuck was preceded in death by his parents, his brothers William, Edward “Bud”, and Merle, and his sister Blanche. He will be greatly missed by his wife Joyce, his children Chuck (Kathy) Clark Jr. of Grand Rapids, Julie (Jerry) Carpenter, Jean (Rob) Williams, Lorie (Vinnie) Arcicovich, and Natalie Wroble all of Ludington, his step-children Lisa (Al) Horacek, Mark (Dawn) Belke all of Scottville, and Heidi Belke of Ludington, 14 grandchildren, 12 great-grandchildren, his brothers Joe (Judy) Clark of Montague, and Doug (Georgia) Clark of Florida, and numerous nieces and nephews. Funeral services will be held for Chuck at 12:00 noon on Friday, March 7 at Our Savior Lutheran Church, with his pastor, Rev. James Schroeder officiating. Burial will take place at Brookside Cemetery at a later date. Friends may meet with his family for a time of visitation on Thursday evening from 6:00 – 8:00 PM at the Stephens Funeral Home in Scottville, and on Friday from 11:00 AM until time of services at the church. Those who wish to make memorial contributions are asked to consider Our Savior Lutheran Church.

The family of Charles L. Clark created this Life Tributes page to make it easy to share your memories.

Send flowers to the Clark family.