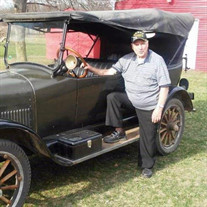 Charles Frederick Hargreaves aged 93 of Ludington, formerly of Grand Rapids and Manistee, passed away on Friday, September 24, 2021. Charles was born on November 12, 1927 in Victory Township, the son of Earl and Philemina (Schneider) Hargreaves and attended Scottville High School. As World War II raged on, Charles enlisted in the United States Army and proudly served his country during the Korean Conflict. In October of 1954, Charles married Norma Forner in Grand Rapids and their marriage was blessed with children Virginia, Paul, Timothy, and Sandra. Charles later married Betty (Peterson) Neilsen on November 12, 1976 and they celebrated 39 years together before Betty preceded him in death in 2016. Charles was also preceded in death by his parents, his daughter Sandra, his son Paul, his brother Larry Hargreaves, his sisters Vi Padgett, June Holden, Irene Sherman, Caroline Lifer, and infant Pearl Hargreaves, and his first wife Norma VanEss. Charles loved cars and worked as a mechanic his whole life. He worked for several dealerships and auto shops in Grand Rapids, and after moving to Manistee with Betty, worked at Yates Chevrolet-Cadillac and most recently for Manistee County Transportation until his retirement. He was a charter member of the Pere Marquette Historical Motor Club, a member of the West Michigan Old Engine Club, and was a longtime member of Emmanuel Lutheran Church in Ludington. He and Betty enjoyed traveling together to old engine shows, flea markets, auto shows, and all of the country looking for the rare finds. Charles loved to hunt and took trips with family to Wyoming for Elk and Antelope, and also enjoyed fishing and mushroom hunting. His family was always very important to him and he would do anything they needed at any moment to help them out. Charles will be greatly missed by his daughter Virginia Scheib of Florida; his son Timothy (Theresa) Hargreaves of Cedar Springs; his grandchildren Cheryl (Larry) Jepsen of Clarksville, Charles A. (Tracy) Hargreaves of Grant, Nicole Scheib of Florida, David (Kathy) Hargreaves of White Cloud, Deserae Hargreaves of Climax, and Lucas Blicki of Middleville; 12 great-grandchildren; 3 great, great-grandchildren; his stepchildren Russell (Diane) Neilsen, Donald (Jackie) Neilsen, Norman (Jenny) Neilsen, and Alice (Joe) Boullion; his sisters Charlotte Mowrey of McBain and Marian Hargreaves of Muskegon; his brother Garland Dempkey of Ludington; his sister-in-law Donna Hargreaves of Manistee; and numerous nieces and nephews. Due to his son Timothy’s recent injury, the funeral service and visitation will be held for Charles at 11:00 am on Saturday, October 2 at the Hurst Funeral Home in Greenville with visitation starting at 10:00 am. Burial will take place for Charles at 10:30 am on Monday, October 4 at Riverside Cemetery in Custer. Those who wish to remember Charles with a memorial donation are asked to please consider the Pere Marquette Historical Motor Club, or the West Michigan Old Engine Club.

The family of Charles F. Hargreaves created this Life Tributes page to make it easy to share your memories.

Send flowers to the Hargreaves family.