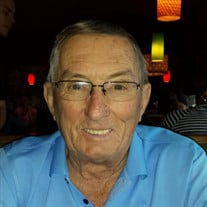 Noted local businessman, Charles F. Wallace, aged 84 of Ludington, passed away on Monday afternoon, August 24, 2015 from complications of a recent illness. Born on March 30, 1931 in Muskegon to Glenn G. and Jessie (Hustad) Wallace, Charles, better known as Chuck or Charlie, graduated from Scottville High School with the class of 1949 and joined the United States Air Force serving in Europe during the time of the Korean Conflict in the Photography Division. Upon his discharge from service, he returned home and married Joyce Abrahamson (Rexford), and together they raised their 5 children. Charlie worked for and became Sales Manager of the Ludington Daily News, then after a brief assignment in Florida as Sales Manager of a Sunday Supplement to several Central Florida newspapers, he and the family returned to Ludington to take over ownership of the Starlite Drive In from his father Glenn G. Wallace, at the intersection of US 10 & 31. After operating for several years, the Drive In was sold and Charlie bought the Dairy Queen in Ludington. He expanded the Dairy Queen operations to two additional locations at Stearns Park. After selling the Dairy Queen operations, he opened Sounds Good Music store on Ludington Avenue. Charlie later married Alice Genson and they spent summers in Ludington and winters at Hidden Golf in Winter Haven, Florida where he was responsible for a 60-man traveling golf league. Charlie had a colorful and engaging personality who loved music with a heart that made him reach out to help others. His positive attitude was infectious. He and Alice were honorary members of the Scottville Clown Band and members of Victory Trinity Lutheran Church. An avid golfer, Charlie and Alice spent many days on the fairways where they both have scored a Hole-in-One. He recently worked part time at Hemlock Golf Course, was a member of the Scottville Optimist Club, the Ludington Elks, and the American Legion Post 76. Charlie will be greatly missed by his wife Alice, his children, Glenn "Zip" (Pam) Wallace, Robert (Lisa) Wallace, Kathy (Tom) Shafer, Charles W. Wallace and Claudia (Aaron) Wilkinson; Alice’s children, Joni (Larry) Sholtey, Stanley (Patti) Bogus, Ronald (Lynda) Bogus, Dennis (Allison) Bogus, and Gary Bogus; eleven grandchildren, Matthew and Lauren Shafer, Taralyn and Tom Wallace, Bobbi Bogus, David and Wesley Forrester, Keely and Jake Sholtey, Tyler (Brittani) Bogus, Jason and Jamie Purdy, Tosha Jones, Elliot, Alexis and Jesse Bogus; and several great grandchildren. He was preceded in his death by his parents, Glenn G. and Jessie Wallace, sisters, Glenna Wallace Dodson, Wilma Hill, Gloria Lynch, and brother Glenn (Butch) Wallace. Funeral services will be held for Charlie at 11:00 AM on Saturday, August 29 at the Bethany Lutheran Church in Ludington, with Rev. William Huether officiating. Friends may meet with his family for a time of visitation on Friday evening from 5:00 - 7:00 PM at the Stephens Funeral Home in Scottville. Those who wish to make contributions in Charlie’s name are asked to consider the Scottville Clown Band Scholarship Fund, or Victory Trinity Lutheran Church.

The family of Charles F. Wallace created this Life Tributes page to make it easy to share your memories.

Send flowers to the Wallace family.