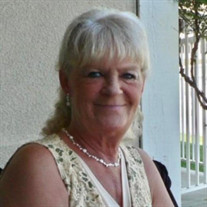 Cynthia Ann Purchase (Jensen), 73, passed away peacefully Sunday morning, October 25, 2020 while under the care of her oldest grandson, Travis Woodring and Stephanie Flood. Although she had began to decline from the symptoms of Dementia, it is because of Travis’s selfless commitment to her daily care that we all were given these extra years. Our entire family is grateful for his loving sacrifice as we know that she was right where she was most happy in her final days. Born November 30, 1946, Cindy grew up in Scottville most of her life with a few adventures in California and Florida. She graduated from Mason Co. Central in 1964 and went on to study secretarial skills while living in Chicago. Cindy was a mother of two daughters, Brenda (Mark Cole) and Teresa ( David Navadel of San Diego), has five grandchildren, Travis and Jorden Woodring and Meagen Hutchison(Brenda), and Savana and David Navadel(Teresa). She also has five great-grandchildren, Talon and Tatum Woodring (Travis), Riley Hutchison, (Meagen) and Jakob and LilyAnn Woodring( Jorden). She was preceded in death by both her parents, Ivan and Jeanne Jensen of Scottville as well as two siblings, Sandra Gonzalez and Ronald Jensen. She leaves behind four brothers, Richard( MaryAnn), Donald(Donna), Vic (Kim) and David as well as two younger sisters, Pamela ( James DeRooy) and Cheryl (Don Fletcher), along with many nieces, nephews and cousins. Cindy enjoyed a life of adventure and was happiest when she was out with her friends and family. Her third husband, local country artist, Roger A. Purchase, gave her just that during the many years they were married. The two of them would travel across country stopping in San Diego or Las Vegas but ultimately settled in Zephyr Hills Florida each winter. Each stop provided plenty of stories to share and friends were made along the way. When they were in Luther, you could count on finding them at the downtown pub, enjoying the locals and Roger singing to his biggest fan. Cindy worked in many different types of jobs…from secretarial to the counter at the Scottville Livestock Sale and later enjoyed working as a waitress alongside her oldest daughter Brenda. Together they worked at the Scottville Café, The Corner Café in Ludington and finally at Brenda’s own restaurant, Brenda’s Harbor Café downtown Ludington. It is here that her high-energy, fun-loving, witty, “tell it like it is” personality was on full display. She will forever be remembered for how she would dress up in fun outfits and would often wear a sailor’s cap when she would fill in as the hostess. Making people laugh and not take life so seriously was what made Cindy special. In addition to her personality, she had a huge heart and was a champion for underprivileged or abused children. She founded the “Pennies for Children” collection jars at Brenda’s Harbor Café and it continues in her memory. A ceremony to celebrate Cindy’s life will be held for her family next month at Wyman Funeral & Cremation Service in Scottville followed by a “toast” to her life at a location to be announced. Please send regards to Brenda’s Harbor Café or donate in Cindy’s name to the Alzheimer’s Association or to “Pennies for Children”.

Cynthia Ann Purchase (Jensen), 73, passed away peacefully Sunday morning, October 25, 2020 while under the care of her oldest grandson, Travis Woodring and Stephanie Flood. Although she had began to decline from the symptoms of Dementia, it... View Obituary & Service Information

The family of Cinthia Ann Purchase created this Life Tributes page to make it easy to share your memories.

Send flowers to the Purchase family.