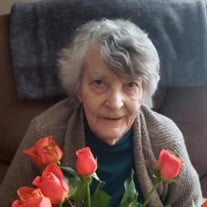 Cora deVries aged 89, longtime resident of Fountain passed away peacefully on Tuesday, February 23, 2021 at Grancare Adult Foster Care in Custer. Cora was born on August 16, 1931 in Julianadorp, North Holland, Netherlands to Jacob and Elizabeth (Breen) VanderHaag. On October 2, 1952, she married Ron deVries, and they celebrated 52 years of marriage before Ron’s passing on October 27, 2004. In April 1956, Ron and Cora immigrated to the United States, settling in Sheridan Township near Bear Swamp on North Campbell Road. Cora’s parents, along with her sisters, Betty and Alie, and brother Fred, had immigrated the previous year. In 1965, Ron and Cora became American citizens, something they were both very proud of. Cora worked on the “muck” farm for several years and was also a waitress at Walt’s Pool Hall in Scottville, where Ron, along with Cora’s father, Jake, were frequent customers at the billiards tables. In the 1990s, Ron and Cora purchased Betty’s Restaurant in Scottville (now North Country Cafe) from Cora’s sister Betty. Later in life Cora worked for her daughter, Mary, at Grancare AFC in Custer. Cora enjoyed going to the casino; she loved her chance at pulling the one armed bandit. Her love for Elvis Presley was beyond words. Her dream was to visit Graceland, which came true for her in 2009. Cora was preceded in death by her husband, Ron; her parents, Jacob and Elizabeth VanderHaag; her in-laws, Martinus and Maartje deVries; her brother Siebe VanderHaag and his wife, Tiny; her sister Ypie “Ellie” VanderHaag and her husband, Chris; and her sister, Betty Plumb. Cora is survived by her children, Mary (Bill) Curran of Ludington, Jake Devries (Tina Brighton) of Fountain; Linda Devries-Smith (Fred Smith) of Ludington; daughter-in-law Terri Devries of Alabama; grandchildren, Dustin, Brent (Sheena), and Chris Devries; Derek (Amy) Devries, Rachel (Travis) Markham; James (Sierra) Devries; Jordan Thomas Devries; Cody Frederick Smith; and Dylan Ronald Smith; great-grandchildren, Isabella and Esme Lebrun, Kaylin, Rogue, and Savanah Devries, Corbin and Tyler Devries, Caleb and Ally Markham, Ava and Trent Devries; sister Alie VanderHaag; brother Fred VanderHaag; along with several nieces and nephews. The family wishes to send a sincere thank you to the wonderful staff and residents at Grancare for their love and kindness they showed in taking care of Cora. The family also wishes to thank the staff of Hospice who was there for her as well. A graveside memorial service at Bachelor Cemetery will be held for Cora later in the spring.

The family of Cora deVries created this Life Tributes page to make it easy to share your memories.

Send flowers to the deVries family.