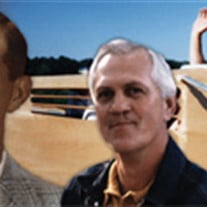 Corliss Kortge lived a life saturated with honesty, integrity and respect. He was many things in his life &#8211; a musician, innovator/builder, nurse, artist, farmer, but most importantly, a devoted husband, father and grandfather. He lived... View Obituary & Service Information

The family of Corliss Frederick Kortge created this Life Tributes page to make it easy to share your memories.

Send flowers to the Kortge family.