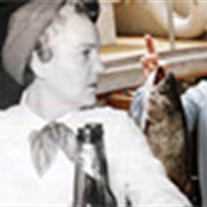 LIFE STORY: Besides her three sons, five grandchildren, and five great grandchildren, the most important things in Kim&#8217;s life were the following, though not necessarily in this order: working, card playing, keeping her hair appointments,... View Obituary & Service Information

The family of Cuma "Kim" Malinda Burwell created this Life Tributes page to make it easy to share your memories.

LIFE STORY: Besides her three sons, five grandchildren, and five...

Send flowers to the Burwell family.