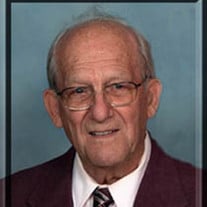 OBITUARY:Dana Leland Reid, aged 83 of Free Soil, passed away on Monday, February 22, 2010 at Memorial Medical Center in Ludington. Dana was born on April 22, 1926 in Ludington to William and Lucia (Reene) Reid, and served his country during World War II with the U.S. Navy as destroyer escort. On July 30, 1949, he married Doris E. Bradenburg at the Bachelor Evangelical Covenant Church, and they have celebrated 60 wonderful years together. Dana was a retired member of the Michigan Regional Council of Carpenters Local 687, and previously worked for Northwest Acoustic, and Robert Beaver Plastering. He was a member of the Fraternal Order of Eagles Motor City Lodge #2265 where he had achieved the level of Golden Eagle; was a member of the Custer Gold Bar VFW Post 5096, and the American Legion Post #76 in Ludington. He was also a member of the Patrol Craft Sailors Association in Ludington, and was a faithful member of the Scottville United Methodist Church. Along with his many associations, Dana loved to spend the day fishing and hunting, or dancing the night away with his sweetheart Doris. He was preceded in death by his parents William and Lucia, his stepmother Grace (Lanning) Reid, his grandson Jason Reid, his brother Chester Reid who died during World War II, his sister LaVonne Reid, and his sister-in-law Charlene Reid. Dana will be greatly missed by his wife Doris, his son Jack (Karen) Reid of Detroit; his daughter Wanda (Jim) Reid of Northville; his beloved grandchildren Jesse(Sheila) Reid of Farmington, Jennifer Reid of Detroit, Suzie (Steve) Graham of Livonia, and Alex Shelton of Royal Oak; his precious great-grandchildren Tina Graham, Max Reid, and Chase Reid; his brother Gail Reid of Free Soil; and his sister Irene (Jim) Morrison of North Carolina.

OBITUARY:Dana Leland Reid, aged 83 of Free Soil, passed away on Monday, February 22, 2010 at Memorial Medical Center in Ludington. Dana was born on April 22, 1926 in Ludington to William and Lucia (Reene) Reid, and served his country during... View Obituary & Service Information

The family of Dana Leland Reid created this Life Tributes page to make it easy to share your memories.

Send flowers to the Reid family.