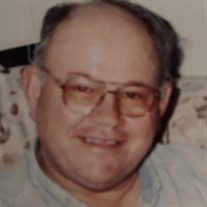 Danny O'Brien aged 74 of Scottville passed away on October 27, 2020 in Grand Rapids. He was born on May 8, 1946 in Jamestown, NY to Danny and Ruth (Nieder) O'Brien and and grew up with his siblings in rural Chautauqua County. As a teenager, he loved spending time working on cars with his best friend, Ron Saxton, as well as participating in Future Farmers. The two of them had many adventures as teens and adults. After high school, Danny joined the United States Coast Guard as an engine-man on the USCGC Bramble during the Vietnam conflict. This further fueled his passion for mechanics. He went on to selflessly serve as Transportation Supervisor and Bus Mechanic for Mason County Eastern Schools until he retired in 2008. While in the Coast Guard, Danny was stationed in Ludington where he met and married the love of his life, Jan Billings. They married on June 24, 1967 and started a family. Danny was temporarily stationed in Detroit, but eventually he and Jan settled back in the Scottville area to raise their family. Danny loved to go camping with his family and he made sure that his children visited all of the Great Lakes. He enjoyed spending time reading his Louis Lamoure novels and watching westerns and mysteries on television. He was a sweet man who always had a kind word and compassionate heart. He was willing to assist anyone who needed help. Being a kind and dependable father and grandfather was of utmost importance to Danny and he certainly did not disappoint when it came to wholeheartedly loving his family. In addition to his wife of 53 years, Danny will be greatly missed by his children Shawn (Mary) O'Brien, Shannon (Matt) Miller, Donald O'Brien, Jeremy O'Brien, Joshua (Jenn) O'Brien, and Amanda (Scott) Cole; his grandchildren Emerald O'Brien, Catherine O'Brien, Jago O'Brien, Rodney (Rachel) Miller, Judith Miller, Isabell O'Brien, Gabriel Cole, Makayla Cole, and Callen Cole. He will also be missed by his mother-in-law, Betty Billings; his siblings Gary (Gretta) O'Brien, Bonnie Cobb, Thomas (Diane) O'Brien, and David (Diane) O'Brien; and sisters-in-laws Bev (Bob) Budzynski, and Judy Carstens; along with numerous nieces and nephews who held a special place in his heart. Danny was preceded in death by his parents Danny and Ruth O'Brien; father-in-law George Billings; grandchildren Tristen Miller and Gage Cole; brothers-in-law Charles Cobb, Gary Billings, and Dick Carstens; and daughter in law Marcey O'Brien. Danny's graduation of life service will be held at 2:00 PM on May 8, 2021 at Scottville Riverside Park with Pastor Rick Hodgeson officiating. Light refreshments will follow. Danny’s family will be present to welcome friends and loved ones starting at 1:00 PM. Guests are respectfully asked to wear facial masks, socially distance and if able, to bring a lawn chair as this is an outdoor event. As Danny had a deep love for the Lord and for his country, those who wish to remember him with a memorial donation are asked to please consider either the Scottville United Methodist Church or the Wounded Warrior Project.

Danny O'Brien aged 74 of Scottville passed away on October 27, 2020 in Grand Rapids. He was born on May 8, 1946 in Jamestown, NY to Danny and Ruth (Nieder) O'Brien and and grew up with his siblings in rural Chautauqua County. As a teenager,... View Obituary & Service Information

The family of Danny L. O'Brien created this Life Tributes page to make it easy to share your memories.

Send flowers to the O'Brien family.