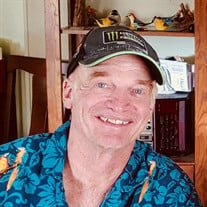 David William Bick, 62, of Lakeland, Florida formerly of Scottville, died Tuesday, March 12, 2019 at AdventHealth Hospital in Tampa, Florida following a long illness. Dave was born on June 17, 1956 in Huntington, West Virginia, the son of Ronald and Elizabeth Ann Bick. He graduated from Portage Northern High School in 1975. After graduation, Dave served his country with the United States Marine Corps. Dave was a Marine to the end. He thoroughly enjoyed his time in the Corp. He would proudly tell others he visited 17 countries while serving. Following his discharge from service, he returned to Mason County and attended West Shore Community College graduating in 1983 with an Associate of Applied Arts and Sciences Degree in the field of Electronics Technology. He married Esther Castillo of Scottville who preceded him in death on January 1, 2000. Dave was also preceded in death by his mother Ann and his brother Steve Bick. Dave loved to skydive. He turned his passion into a career working as an Accelerated Freefall instructor, camera man, professional demo jumper and a master parachute rigger. He was a member of the United States Parachute Association. Dave logged over 5000 skydives in his career and also did base jumping. He worked in dropzones all over the State of Michigan as well as other states especially at Skydive City in Zephyrhills, Florida, where he and Esther, also a jumper, lived several years during the winters. He also was a drop zone manager at Skydive Hastings and at Grant, MI. He moved near his parents in Florida in 2007, where he continued to skydive and ride his motorcycles. In his later years, he learned to love gardening. He especially loved buying pineapples, eating them and planting the tops to grow more pineapples. He has a total of 39 pineapples growing around the home he shared with his friend Alexa Matthews. He was rewarded with 6 of his home grown pineapples last year. Dave also enjoyed grilling, photography, watching NASCAR and FOX News, fixing cars, going to garage sales and the couple's two Shihu Tzus, Jake and especially Abby, who as he became progressively more ill, was his constant companion. David worked a number of different jobs besides teaching skydiving. He worked installing cable TV, security systems, and construction. He could fix anything from plumbing to remodeling an entire home. Dave will be greatly missed by his daughter Amanda Bick of Indianapolis, IN, Step Daughter, Brianna Taylor, Grand Haven, MI, his father Ronald Bick and brother Todd Bick both of Lakeland, FL, and his sister Tonya Grigsby and husband Donner of Williamsburg, VA. He is also survived by his Aunt Sandy and Uncle Fred Shoppe of Chesapeake, Ohio, mother and father-in law, Alice and Raymond Castillo, four brother-in-laws, Ray and Ed Castillo of Scottvile and Jerry and Rick Castillo of Grand Rapids, many nieces and nephews and his 3 Shoppe cousins. Also surviving is his best friend that he considered his brother, Jeff Johnson of Scottville. Friends are invited to gather with his family to celebrate his life on Saturday, March 16 from 12:00 noon - 2:00 pm at Wyman Funeral & Cremation Services in Scottville. Those who wish to remember Dave with a memorial donation are asked to consider The National Coalition For Homeless Veterans (NCHV) or other Veterans organization of your choice.

The family of David William Bick created this Life Tributes page to make it easy to share your memories.

Send flowers to the Bick family.