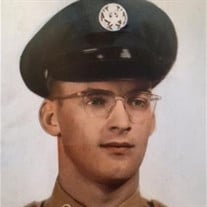 MSGT Ret. Delos “Bud” M. Matevich, aged 82 of Scottville passed away on Thursday, October 12, 2017. Bud was born on December 12, 1934 in Eden Township, the son of Stanley and Mabel (Barton) Matevich. Bud joined the US Air Force in September, 1952 following his graduation from Mason County Central and served 20 years until his retirement in October, 1972. After returning home to Mason County, he worked an additional 26 years for Harbison-Walker in Ludington. Bud married Frances L. Joneson in September, 1963 and they recently observed their 54th wedding anniversary. Following his retirement Bud and Fran spent their free time traveling and their winters camping at Tyndall AFB in Florida. Bud always looked forward to his monthly breakfasts with his fellow MCC classmates and his Harbison-Walker friends. If Bud wasn’t cheering on his grandchildren in their activities, he could always be found reading a book or working on a puzzle In addition to his wife Frances, Bud will be greatly missed by his children Delos M. Matevich II and Amanda Allen and husband Jim all of Scottville, his grandchildren Nicholas, Jessica, and Rachel Allen, his sisters Marsha Giles of Ludington, and Delcina (Rev. John) Ritter of Levering, his brother-in-law Wesley (Denise) Joneson of Custer, his sister-in-law Hayla Joneson of Washington, MI, and numerous nieces and nephews. Bud was preceded in death by his parents, his brother USAF MSGT Ret. Robert E. Matevich, sisters-in-law Karlyn Matevich and Barbara Scanson, his brothers-in-law Frederick Joneson, Richard Scanson, and USAF TSGT Ret. Charles Giles, and his niece Karen Giles. Graveside services with Honor Guard rites will be held for Bud at 1:00 pm on Thursday, October, 19 at Lakeside Cemetery in Eden Township with his pastor, Rev. James Schroeder of Our Savior Lutheran Church in Scottville, officiating. Those who wish to remember Bud with a memorial donation are asked to contribute to a Library of the donor’s choice.

The family of Delos "Bud" Matevich created this Life Tributes page to make it easy to share your memories.

Send flowers to the Matevich family.