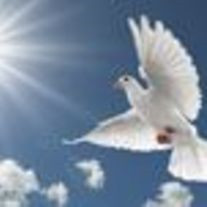 Dolores Jeanette "Dolly" Rotta, 86, of Ludington, passed away Tuesday, February 19, 2019 at Spectrum Health Ludington Hospital. She was born just a few minutes after Christmas on December 26, 1932 to Bernard Zygutis and Jenny (Johnson) Zygutis. As a girl she lived on a backwoods farm in Hamlin Township and attended Nordhouse School. When she was 6, the first of her eight siblings over the next 12 years was born and she spent most of her childhood helping to take care of them. In the summer of 1951, she met her future husband, Russell Rotta, who proposed to her in 1952, and married her on Valentine's Day in 1953. Russell had attended college and worked in Milwaukee after growing up in Ludington, but by 1954, they migrated back to Mason County to stay. She found work with local attorney Wilfrid Hocking as a secretary for a few years, shortly thereafter becoming a mother, eventually having three boys: Russell, John and Thomas. Throughout the rest of her life she also worked as a Scottville postal clerk and carrier, a maid, and a conservator. She graduated from West Shore Community College with highest honors holding an associate's degree in General Education. She would remain married to Russell until he preceded her in death on September 10, 2016; Dolores, with the help of family, spent the last days of her life at the home they had shared on Pine Street. Dolores is survived by her sons John of Palatine, Ill. and Thomas of Ludington, her brothers, David of Free Soil and Julius "Tug" Smedley of Scottville, her sisters, Margaret (O'Herron) of Manistee, Joyce (Powell) of Elk Rapids, and Donna (Nelson) of San Antonio, Tex., seven grandchildren, and numerous spouses, nieces, nephews and their issue. She was preceded in death by her husband, her son Russell, her brothers William and Richard Smedley, and her sister Edna (Patton). Per Dolores' wishes, cremation has taken place and there will be no services. She will be interred at Lakeview Cemetery in a private ceremony this spring, placed next to her husband for eternity; it is her wish that all family and friends interested in celebrating her life gather there together and share their memories. In lieu of flowers, please do what Dolores did by giving generously to your favorite charitable cause.

The family of Dolores Jeanetta Rotta created this Life Tributes page to make it easy to share your memories.

Send flowers to the Rotta family.