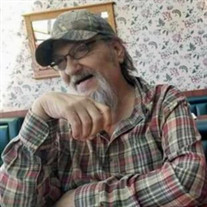 Donald Thomas Keller aged 67 of Fountain passed away on Saturday, April 10, 2021 at Blodgett Hospital in Grand Rapids. Donald, also known as “Duck” to his friends, was born on April 29, 1953 in Muskegon, the son of Weslie D. and Cora B. (Reska) Keller, and graduated from Ludington High School with the class of 1973. Following graduation, he began working alongside his father at Handy Things in Ludington before working at the Mason County Landfill in Scottville. After the landfill closed, he drove a picker tractor for Stokely’s Cannery and eventually went to work for the Briggs family at Heifer Haven Farm as a farm hand, retiring after 22 years of employment. Don enjoyed spending time fishing, snowmobiling, and hunting with his three daughters and was very proud when each of the girls shot their first deer. He also enjoyed riding motorcycles with his family and bowled on the McCormick Sawmill team at the old Spartan Lanes in Scottville. He was preceded in death by his parents Wes & Cora; his grandparents whom he spent a lot of time with through the years – Sylvester & Beatrice Reska; his brother-in-law Lawrence Granger; and his aunts and uncles Elmer & Lavonne Vroman, Eugene & Rita Keller, and Leslie & Clara Keller. Don will be greatly missed by his daughters Susan (Michael) Regina of Grand Rapids, Sara (David) Burrell of Fountain, and Stacy (Billy) Mayse Jr. of Custer; his grandchildren Anthony Keller, Makayla and Alexander Regina all of Grand Rapids, Angie Mayse of Custer, and stepgranddaughter AshLee Porter also of Grand Rapids. He will also be missed by his sister Diane Granger of Belleview, FL and his cousins Sandra Washington and Katie (Louis) Johnson all of Muskegon, and many Keller cousins scattered throughout the United States. Funeral services will be held for Donald at 1:00 PM on Saturday, April 24th at Wyman Funeral & Cremation Services in Scottville with burial to follow at Bachelor Cemetery in Fountain. Friends may visit with his family prior to the service from 12:00 noon – 1:00 PM at the funeral home. Social distancing protocols will be followed. Those who wish to remember Donald with a donation are asked to please consider his family to assist with expenses.

The family of Donald Thomas "Duck" Keller created this Life Tributes page to make it easy to share your memories.

Donald Thomas Keller aged 67 of Fountain passed away on Saturday,...

Send flowers to the Keller family.