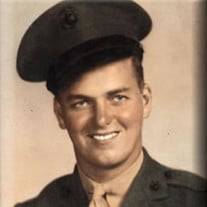 OBITUARY:Donald William Luomala, aged 91 of Scottville, died peacefully at his home on Saturday, July 10. 2010. Donald was born on March 24, 1919 in Kaleva to Matti and Selma (Junnikala) Luomala, and graduated from Kaleva-Norman-Dickson High School with the class of 1938. Following his graduation he worked for the Civilian Conservation Corps and Cadillac Motor before answering the call of his country and enlisting with the Marine Corps during World War II. He served in the South Pacific Theatre with the 2nd Marine Division and fought in the Tarawa, Saipan, Tinian, Guadalcanal, and the Solomon Islands campaigns. He was awarded the Purple Heart for wounds he received during the Tinian campaign. Upon his discharge in 1945, he returned to Royal Oak and worked for Dodge Forge until his marriage to Delores (Lewis) on March 30, 1963 in Hazel Park. They moved to Mason County where he began working for the U.S. Postal Service, and eventually settled in Scottville in 1970. Donald retired from the Postal Service in 1984 after 17 years of service. He enjoyed spending time pitching horseshoes, cheering for the Green Bay Packers and the Fighting Irish of Notre Dame, and traveling all over the United States with his family. He was very proud of his Finnish heritage and his service with the Marine Corps, but his greatest joy came from the company of his family. Donald was always very loyal to his friends, his family, and his country. On March 7, 2008, he was preceded in death by his beloved wife Delores with whom he was able to celebrate 45 years of marriage. He was also preceded in death by his parents, his brother John, his sister Thelma Purgill, and two granddaughters. Donald will be greatly missed by his daughter Sonja and her husband James Ratliff of Scottville; son Joe Burgett and his wife Tina of Muskegon; his daughter Robin DuPerron of Kenai, Alaska; 8 grandchildren; 15 great-grandchildren; a great, great-granddaughter; and his sister Esther Henrichsen of Manistee. Friends may meet with his family for a time of visitation on Wednesday, July 14 from Noon – 2:00 PM at the Stephens Funeral Home in Scottville with Graveside services following at the Brookside Cemetery.

OBITUARY:Donald William Luomala, aged 91 of Scottville, died peacefully at his home on Saturday, July 10. 2010. Donald was born on March 24, 1919 in Kaleva to Matti and Selma (Junnikala) Luomala, and graduated from Kaleva-Norman-Dickson High... View Obituary & Service Information

The family of Donald William Luomala created this Life Tributes page to make it easy to share your memories.

Send flowers to the Luomala family.