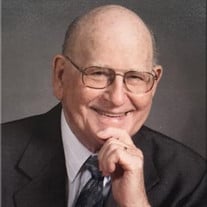 Donald R. Schulz aged 88, former resident of Scottville, passed away peacefully on Tuesday, November 2, 2016 at Samaritas Senior Living in Grand Rapids. Donald was born on March 31, 1928 in Detroit, the son of E. Carl and Helena W. Schulz, and graduated from Scottville High School with the class of 1946. On May 29, 1948 he married Mary L. Conrad in Chicago, and they have celebrated 68 years by each other’s side. Donald began working for Capital Airlines in Muskegon which later became part of United Airlines, serving as a Station Agent for their terminal in Muskegon and later helping to start their terminal in Bradenton, Florida. He worked all phases for the airlines from ticket counter, baggage handler, ground crew and more for over 41 years, retiring in 1991. Donald loved to spend his down time sailing the open waters around Michigan with his family, and enjoyed dabbling in electronics as well. He will be greatly missed by his wife Mary, his son Bradley (Carol) Schulz of Wyoming, his daughters Christie (Don) Morehouse of Walkerville, Diane (David) Hvizdos of Jenison, and Lori (Ken) Martin of Grand Rapids. He will also be missed by his 9 grandchildren Leigh, Jessie, Karen, Jennifer, Frank, Stephanie, Ryan, Eric, and Daniel, his 14 great-grandchildren, his sister Dorothy (Bill) Talsma of Scottville, his sister-in-law Betty Woods of Ludington, and numerous nieces and nephews. Donald was preceded in death by his parents. Funeral services will be held for Donald at 2:00 pm on Friday, November 4 at Our Savior Lutheran Church in Scottville, with Rev. James Schroeder officiating. Burial will follow at Brookside Cemetery. Friends may meet with the family for a time of visitation on Friday from 1:00 pm until time of services at the church. Those who wish to remember Donald with a memorial donation are asked to consider Our Savior Lutheran Church, or the Global Lutheran Outreach – Talsma Ministry, envelopes will be available at the church.

The family of Donald R. Schulz created this Life Tributes page to make it easy to share your memories.

Send flowers to the Schulz family.