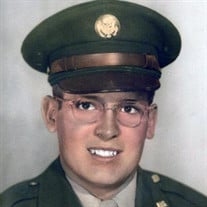 Donald Victor Volz died peacefully on Thursday, December 5, 2019 at OakView Medical Care Facility in Ludington at the age of 91. Donald leaves behind his son Howard (Elaine) Volz of Spring, Texas; son-in-law Robert (Susan) DePuy of Rock Island, Illinois; granddaughters Christina (Thure) Johnson, Rebekah (Derek) Clark, Courtney (Keith) Hodgson, Rachel (Kevin) Perrine, Deborah (Cory) Saylor, and Caitlin Volz; 11 great-grandchildren; and his sister Nancy (Robert) Layman. He was preceded in death by his parents Howard F. and Margaret (Bierman) Volz; his beloved wife of 62 years Patricia in 2018; their daughter Cynthia DePuy, and great-granddaughter Addison Hodgson; his brothers Kenneth Volz, Robert Volz, and Jerauld Volz; and his sister Marilyn (Walter) Roth. Donald was born on August 15, 1928 in Cincinnati, Ohio to Howard F. and Margaret Volz and graduated from West High School in Columbus, Ohio in 1946. Following graduation Donald joined the Army Air Corps in July 1946 to serve his country. His specialty was Airplane Electrical Mechanics where he attained the rank of Sergeant. He left the Air Force in July 1949 and attended Moody Bible Institute in Chicago, Illinois to study the Bible. He graduated from Moody in 1953 and then went on to Wheaton College in Wheaton, Illinois, graduating with a Bachelor of Arts in Music in 1955. He met the love of his life, Patricia Pullen at Wheaton College and they married on August 19, 1955 in Wheaton. Donald also received a Masters Degree in vocal music from the American Conservatory of Music in 1959. In his professional life, Donald worked in various educational music positions, first on the high school level at Glenbard East High School in Lombard, Illinois, and then on the college level at Trinity College (currently Trinity International University) in Deerfield, Illinois. He worked in the classroom and as a vocal teacher. He also was very involved in musical and theatrical productions throughout his whole career. Donald left teaching in 1979 and he and Patricia permanently moved to Pentwater, Michigan, where they enjoyed their marriage, family, and friends for many years. Donald and Patricia went on several mission trips to Russia and enjoyed many other travel and mission experiences throughout their lives. Donald lived his life as a born again believer of Jesus Christ, living out the Great Commission serving God’s people daily, and is now enjoying his heavenly reward with God and singing His praises with all those who preceded him. A Memorial service to celebrate Donald’s Life and Ministry will be held at 11:00 am on Saturday, June 27, at the First Baptist Church in Pentwater, with a reception to follow. All are welcome to attend and celebrate Donald’s life. Those who wish to remember Donald with a memorial donation are asked to consider the Wounded Warrior Project.

The family of Donald V. Volz created this Life Tributes page to make it easy to share your memories.

Send flowers to the Volz family.