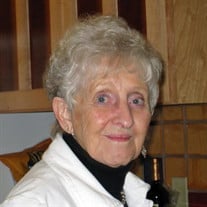 Donna Merrill aged 90, longtime resident of Scottville, passed away on Thursday November 5, 2020 in Saint Joseph, Michigan. Donna was born in Scottville on December 23, 1929, the daughter of Lloyd and Alma (Fox) Buckingham and graduated from Scottville High School with the class of 1947. On June 4, 1948, Donna married Ronald Merrill in Scottville and they celebrated 61 years together before Ron preceded her in death on September 16, 2009. Ron and Donna were blessed with one son, Scott. Donna was a housewife, mother, and grandmother. She was a member of Scottville United Methodist Church and worked at the Mason County Medical Care Facility in the Diversional Therapy department for several years. Ron and Donna enjoyed wood crafting, making yard art, gardening, and various other projects. Donna and Ron loved Scottville and dedicated many hours to the community. They were recognized together by Scottville as “Citizens of the Year,” an honor they were very proud of. Ron and Donna were also proud members of the Mason County Garden Club and were instrumental in the placing of the flower baskets in Scottville, a tradition that continues today. Donna is survived by her son, Scott Merrill and his wife Nancy of Saint Joseph, Michigan, and her beloved grandson Christian (Cynthia) Merrill of Bordentown, New Jersey, along with several nieces and nephews. Besides her parents and husband Ronald, Donna was preceded in death by her sisters Judy Reader, Elois Claveau, and infant sister Betty Lee Buckingham. Per her request, cremation has taken place and the family will celebrate her life at a later date. Memorial contributions in Donna and Ron’s name may be directed to the Scottville Clown Band Raymond Schulte Scholarship Fund (P.O. Box 21, Scottville, MI 49454).

Donna Merrill aged 90, longtime resident of Scottville, passed away on Thursday November 5, 2020 in Saint Joseph, Michigan. Donna was born in Scottville on December 23, 1929, the daughter of Lloyd and Alma (Fox) Buckingham and graduated from... View Obituary & Service Information

The family of Donna M. Merrill created this Life Tributes page to make it easy to share your memories.

Send flowers to the Merrill family.