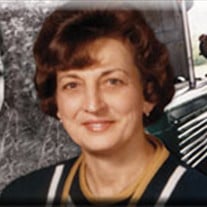 DOROTHY'S LIFE STORY:Many characteristics make up the lives of great people, but those derived from the heart are the qualities that leave a forever imprint on the hearts of others, and Dorothy Schwass was such a woman. Resourceful and creative,... View Obituary & Service Information

The family of Dorothy Marie Schwass created this Life Tributes page to make it easy to share your memories.

Send flowers to the Schwass family.