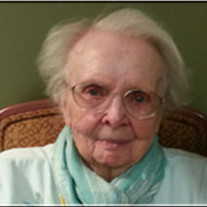 DOROTHY'S OBITUARY:Dorothy VanSickle, aged 87, a lifelong resident of Fountain, died peacefully on Sunday, February 2, 2014 at Oakview Medical Care Facility – Sutter Living Center in Ludington. Dorothy was born on April 27, 1926 to John and Emma (Bauske) Budzynski and attended Fountain School and Scottville High School. Dorothy worked at Seal Power in Muskegon during World War II. On September 14, 1946, she married Robert VanSickle, and they celebrated 49 years together before Robert preceded her in death in 1995. Dorothy was also preceded in death by her parents, her daughter Sue Ellen in 1964, and her daughter-in-law Kimberly VanSickle in 2010.Dorothy worked as a cook for Fountain Schools and Mason County Eastern Schools until her retirement in 1988. She was a leader of 4-H for many years where she taught sewing, was a member and served as Secretary/Treasurer of the Citizens Sportsman’s Club in Fountain, loved to knit, was an avid reader, and was very proud to bag one of the largest bucks in the family while deer hunting. She was especially proud of the 8 pt. bucks she shot. Dorothy is survived by her sons Alvin (Linda) VanSickle of Fountain, Charles “Pudge” (Julie) VanSickle of Custer, Tom VanSickle of Scottville, and James (Jeanne) VanSickle of Fountain, her grandchildren Sue Ellen (Fred) VandeVoorde, Kelley (Troy) Cogle, Miranda (Darrell) Crawford, Kristina (Christopher) Vargo, Kayla (Justin) Wolfe, Zachary (Chelsea) VanSickle, Jamie (Stewart) Sykes, Joshua Walker, Gabriel Walker and his fiancée Michelle Fenner, Kaitlin Walker, Tabitha Reed VanSickle, Robert Eugene (Kelly) VanSickle, and Kevin (Patti) VanSickle, her great-grandchildren Kasey, Kyle, Taylor, Aaron, Brenna, Wyatt, Avery, Lindsey, Macy, Simon, Gracie, Mallory, Robbie, and Logan, her brother Ike Charles (Charlene) Budzynski of Ludington, and many nieces and nephews.Funeral services will be held for Dorothy at 1:00 PM on Monday, February 10 at the STEPHENS FUNERAL HOME in Scottville, with Rev. Norman Letsinger officiating. Burial will take place at Fountain Cemetery in the spring. Friends may meet with her family for a time of visitation on Sunday afternoon from 4:00 – 6:00 PM, and on Monday from 12:00 noon until time of services at the funeral home. Those who wish to make memorial contributions are asked to consider Harbor Hospice, or Oakview Medical Care Facility – Sutter Living Center.

The family of Dorothy VanSickle created this Life Tributes page to make it easy to share your memories.

Send flowers to the VanSickle family.