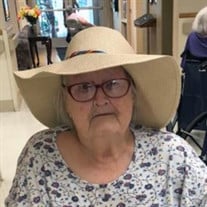 Edith Vanessa Long aged 93 of Fountain passed away on Tuesday, June 29, 2021 at Medilodge of Ludington. Edith was born on February 17, 1928 in the Wellswood area of Torquay, County of Devon, England, and was the daughter of Capt. Samuel H. and Florence B.E. (Lonnen) Mayne. The Mayne family had a very influential heritage in England which led to many great opportunities for Edith growing up. Her father, a British officer, worked closely with Winston Churchill and their family were frequent guests at his estate. Renowned novelist, Agatha Christie lived in their town and enjoyed reading to Edith and her friends at their school. During World War II, the United States military used Torquay as a rally point for troops with its seaport location. Edith and her friends were able to sneak away from school and attend the USO dances where she met a charming GI named Edward Long from Irons, Michigan. They would marry in 1945 and on June 5, 1946, Edith arrived in New York Harbor with their first child Michael in her arms. Edith and Edward would raise 12 children in Irons and she loved to share the many stories and adventures she encountered throughout her life with them and her numerous grandchildren, great-grandchildren, and great, great-grandchildren. One of the skills Edith brought with her from England was her love of needlepoint. Through the years, her needlepoint works won many awards both locally and at state competitions. Her greatest joy was always found in the presence of her family, especially the grandchildren. Edith was preceded in death by her husband of 52 years – Edward in 1997; their sons Michael, Kenneth, and Frederick; and her sister Joy who lived in Auckland, New Zealand. Edith will be greatly missed by her children Edwand John (Rosemary) Long of Fountain, Suzanne (Gary) Detwiler of Midland, Linda (Al) VanSickle of Fountain, Barbara Carlson of Ludington, Rose Marie (Robert) Lennox of Bangor, Annette (Thomas) Severson of Midland, Victoria Berg of Muskegon, Brian Long (Janet Macy) of Custer, and Jean Long ( Bill Steffens) of Scottville; her daughter-in-law Jackie Long of Twin Lake; 22 grandchildren; and numerous great-grandchildren and great, great-grandchildren. A Graveside Ceremony will take place for Edith at 11:00 am on Saturday, July 10 at Lakeview Cemetery in Irons. Those who wish to remember Edith with a memorial donation are asked to please consider making it to her family to assist with expenses.

Edith Vanessa Long aged 93 of Fountain passed away on Tuesday, June 29, 2021 at Medilodge of Ludington. Edith was born on February 17, 1928 in the Wellswood area of Torquay, County of Devon, England, and was the daughter of Capt. Samuel H.... View Obituary & Service Information

The family of Edith Vanessa Long created this Life Tributes page to make it easy to share your memories.

Edith Vanessa Long aged 93 of Fountain passed away on Tuesday,...

Send flowers to the Long family.