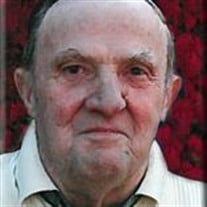 Edward Joseph Petipren of Scottville was carried by angels to the Lord early Tuesday morning, April 5, 2016 at the age of 81. He had been in ill health for the past few years and after a fall recently, had been cared for at Tendercare of Ludington. Ed was born on December 14, 1934 to Lloyd and Bertha Petipren in Detroit, and served his country by joining the US Navy. After his return home, he married the love of his life Sue Mann on November12, 1960 at St. Peter and Paul's Catholic Church in Ionia, MI. The Petipren's were blessed with three sons, Tim, Tom and Todd. Tim and his son Dain, and Todd all live in Scottville, while Tom and his wife Penny live in Tecumseh, MI with their daughter Meghan who is attending Michigan State University. Tim's son Dain is attending Northern Michigan University in Marquette. The two grandchildren brought a smile to Ed and Sue's face whenever they were around. The Petipren family moved from Smyrna, MI to Mason County in 1965 and finally settled in Scottville where they have lived happily ever since. Ed worked for Michigan Consolidated Gas Company, starting on August 3, 1964 and retiring on January 1, 1993. He was given a nickname by fellow workers, The Iron Horse, as he never took a day off from work. Ed and Sue were very involved in the community of Scottville where they owned and operated the Dairy Barn Restaurant for nineteen years. They took pride in knowing that their patrons were made to feel like family when they walked through the door. Neighbors and friends will surely miss Ed's daily drive by their home in his little red truck as he kept the town of Scottville in check. He will also be missed by special friends like Kristen Knudsen and her son Sean, Donna Knudsen, and especially Rebecca Kapsas. Ed will be greatly missed by is his wife of 55 years Sue, his three sons Tim, Tom and his wife Penny, and Todd Petipren. He will also be missed by his buddy and grandson Dain Petipren, his beautiful granddaughter Meghan, special family friend Rose Uerling and her daughter Rebecca Kapsas, sisters Marjorie Penn, and Evelyn (Fred) Berry, and sister-in-law Joyce Mann. Finally, Ed will be missed by many nieces, nephews, neighbors, and friends. Preceding Ed in death were his parents Lloyd and Bertha, his brothers Raymond and Robert, sisters Rosemary and Rita, his mother and father in law Melvin and Vara Mann, and brother in law Thomas Mann. Funeral Mass will be celebrated for Ed at 11:00 am on Friday April 8, at St. Mary's Catholic Church in Custer with Rev. Dan Depew as celebrant. A time for visitation will be held on Thursday evening from 7:00 – 9:00 pm at the Stephens Funeral Home – Wyman Funeral & Cremation Services in Scottville where the Rosary will be prayed for Ed at 8:30 pm. A meal will follow the mass on Friday at the St. Mary's Community Hall. Those who wish to remember Ed with a memorial donation are asked to consider the building fund of St. Mary's Church, with envelopes available at the funeral home and church.

Edward Joseph Petipren of Scottville was carried by angels to the Lord early Tuesday morning, April 5, 2016 at the age of 81. He had been in ill health for the past few years and after a fall recently, had been cared for at Tendercare of Ludington. Ed... View Obituary & Service Information

The family of Edward Petipren created this Life Tributes page to make it easy to share your memories.

Edward Joseph Petipren of Scottville was carried by angels to...

Send flowers to the Petipren family.