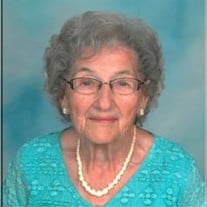 Eleanor Iva Young aged 96 of Scottville, passed away peacefully on February 9, 2015 at Spectrum Health Ludington Hospital. Eleanor was born on July 22, 1918 the third daughter of Ray and Minnie (Dorn) Gifford of Chauvez Road, Riverton Township, and attended East Riverton School and the Evangelical Church of West Riverton. Eleanor graduated from Scottville High School in 1935 and furthered her education at County Normal School in 1936, immediately starting her teaching career at Nickerson School. She also taught at Saint Mary's Lake, Victory, and Rickey Schools. On June 28, 1941, Eleanor married Wendell M. Young and they established a farm on South Scottville Road. She returned to teaching in 1961 for the Mason County Central Schools and while teaching, she also attended Central Michigan University, graduating with a Bachelor of Arts degree in 1964. Her teaching career included MCC Middle School, Nordhouse Elementary, and MCC Elementary until her retirement in 1984. Eleanor was a long standing member of the Scottville United Methodist Church, the Michigan Association of Retired School Personnel, the Michigan Farm Bureau, and White Pine Village where she served as the one room school teacher for visiting school groups and events. She also was a Docent at the White Pine Sugar Bush donated to the Village following Wendell's death. Eleanor was preceded in death by her husband of 58 years, Wendell Young in 1999, her parents, her infant sister, and her sister Leola Gifford, and her brother-in-law and sister-in-law, Joe and Elvie Anderson. Eleanor will be greatly missed by her daughters Beverly (Dan) Hawkins of Winchester, VA, Doris (Ivan) Coles of Muskegon, and Nancy Letts of Scottville, her granddaughters Rebecca (Darel) Harmening of Holland, Sarah (Timothy) Gearon of Atlanta, GA, Rebecca (Kevin) Nulty of Ashburn, VA, and Julia (Paulo) Arruda of Bermuda, her grandsons Jonathan Wendell Chezick of Detroit, and Daniel Wendell Letts of Scottville, her great grandsons Cole and Clay Kennedy of Holland, her great granddaughter Laine Nulty of Ashburn, VA, her nephews Max (Rosemary) Anderson, Dean (Karen) Anderson, Vern (Sue) Anderson all of Wisconsin, and Bruce (Sandy) Anderson of Midland, and numerous cousins and dear friends. Private family services will be held for Eleanor at the Stephens Funeral Home in Scottville with her pastor, Rev. Jack Conklin officiating. Burial will take place for Eleanor at Center Riverton Cemetery in the spring. Eleanor's daughters wish to express their sincere gratitude to the neighbors, friends, relatives, and former students who faithfully attended her birthday parties the past six years. She enjoyed each one, and was highly honored by your presence. Those who wish to make contributions in her memory are asked to consider the Scottville United Methodist Women who graciously helped with her birthday celebrations. Please visit Eleanor’s personal memory page at www.wymanfuneralservice.com to leave a tribute of Eleanor for her family, or to light a candle in her memory.

The family of Eleanor Young created this Life Tributes page to make it easy to share your memories.

Send flowers to the Young family.