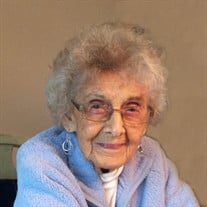 Eloise (Ellie) June Claveau 92 of Scottville passed away on January 31, 2017 at Oakview Medical Care Facility in Ludington after a brief illness. Ellie was born on June 10, 1924 in Huntington, Indiana to Lloyd and Alma (Fox) Buckingham. The family moved to Scottville in 1940 when Ellie and her sisters Judy and Donna were young ladies. She graduated from Scottville High School in 1942 with her sister Judy. Her parents Lloyd and Alma were owners/operators of two businesses in Scottville, the Buckingham Cafe and Scottville Recreation (Pool Hall and Bowling Alley). Along with this they helped Ellie and her sister Judy open K's Dress Shop in Scottville. Ellie also was employed as a Bookkeeper over the years for Stokley's Canning Factory, Mason County Central Schools and Farmer's Petroleum, all of Scottville. When Frank (Butch) Claveau returned from service with the Navy in WWII they married on December 1, 1946 and built a house on West Beryl Street in Scottville, where they lived until her death. Ellie and Butch just celebrated their 70th wedding anniversary on December 1st of last year. Ellie was preceded in death by her parents, Lloyd and Alma Buckingham, her sisters Judy (Fred) Reader and Betty Lee Buckingham. She is survived by her husband Butch, son Bruce Claveau Sr. of Scottville, and daughter Rise (Larry) McIntosh of Ludington, her three grandchildren Bruce Claveau of Seminole, FL, Jordan (Samantha Wcisel) McIntosh of Ludington, and Landon (Jessica) McIntosh of Grand Rapids, her four great-grandchildren Aryanna McIntosh of Ludington, Braylin McIntosh of Sault Ste. MarieI, Ethan Claveau of Colorado Springs, CO, great-granddaughter McIntosh due in April, her sister Donna Merrill of Ludington and several nieces and nephews. For the past 69 years Ellie loved traveling with and listening to the Scottville Clown Band in parades and concerts all over Michigan and other states. She also enjoyed the Pentwater Civic Band concerts for the past 60 years and the Baldwin Sounds of the Forest concerts for over the last 24 years. Ellie served on the Scottville Harvest Festival Queen committee for over 52 years with her sisters Judy and Donna. She was also Scottville Citizen of the Year in 1975, along with her husband Butch. She also loved spending time with her husband, children, grand children and great grand children. Cremation has taken place and per Ellie's wishes, no memorial service will be held. Any memorial contributions may be directed to the Scottville Clown Band Scholarship Fund, 405 N. Main Street, Scottville, MI 49454.

Eloise (Ellie) June Claveau 92 of Scottville passed away on January 31, 2017 at Oakview Medical Care Facility in Ludington after a brief illness. Ellie was born on June 10, 1924 in Huntington, Indiana to Lloyd and Alma (Fox) Buckingham. The... View Obituary & Service Information

The family of Eliose J. Claveau created this Life Tributes page to make it easy to share your memories.

Eloise (Ellie) June Claveau 92 of Scottville passed away on January...

Send flowers to the Claveau family.