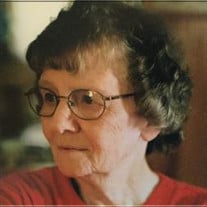 Living during the Depression era was one of the most difficult times in American history. Life savings, homes, and jobs were lost in an instant. This time period was also one of the richest times for America as well. Not a time measured by wealth, but measured by lessons learned, relationships, and work ethic. Elizabeth Grace “Betty” Jobbins was born on March 21, 1923 in Chicago, Illinois, the daughter of Henry and Irene (Holmquist) Jobbins. Shortly after, her family moved to Pentwater, a place Betty formed the foundation of her life. As a young girl on the farm, she raised her own cow for milk and helped with the chickens and rabbits. Growing up during the depression years, she learned to be very frugal, an asset that remained throughout all her years. It was hard for her to throw away any item as long as it had good use left to it. She even wallpapered her little bedroom with the Sunday funny papers because they did not have enough money for paint. Later in life, if there was any way to make something herself, rather than purchasing it, she would figure out a way to do it. For years she picked night crawlers to enhance the family income and sold them to the local sports shops. All the neighbors knew that if they saw a light in their yard after midnight, it was Betty out getting her nightly quota. Sometimes a neighbor would be awake and invite her in for a cup of coffee. Betty’s life changed when she was introduced to a local musician by the name of Milton McLain. They married on June 29, 1941 at the First Baptist Church in Pentwater and settled into an apartment on Harrison Street in Ludington while they began to build a new home on James Street. Here they welcomed their first child, Milton Jr. As World War II had already begun, Milt was drafted into the Army and served oversees in Europe. Betty supported Milt and the war effort as a true “Rosie Riveter” working at a factory in Pentwater that made bomb racks for airplanes. She often stayed with her parents in Pentwater to cut down on the travel, but still took Milt Jr. and rode the bus into Ludington to stay at the apartment and work on the house. Again the lessons learned during the depression were present, as she laid new linoleum in the bedroom herself and purchased war bonds every payday. She had saved enough money to be able to help out a relative with a loan. As a woman of strong faith, Sunday’s were a day of rest. She and Milt Jr. would walk around town, share and ice cream cone, and enjoy sitting on the beach. Her parents would take photos of the two to send to Milt Sr. overseas. After Milt returned from the war, they finished the home on James Street and welcomed Tony, Cindy, and Lawrence into their family. Milt was a very good guitarist and sang often on local radio stations. Betty would sing with him and they even traveled to Chicago to sing together on WLS. The duo continued their singing for years, even enjoying the blessing to sing for their grandchildren. In 1953, the McLain family moved into their final home on Third Street in Scottville. This home was the center of activity in the neighborhood. Her door was always open to friends and family who might stop by for a cup of coffee and her kids friends knew they were welcome anytime. Betty made popsicles in the old tin trays during the summer and every kid around knew a treat was waiting for them. She hosted Bible studies in the home and loved to share her faith with anyone who was interested. The home was filled with the aroma of her cooking and baking, often from the fruits and vegetables from her garden. Betty canned and froze the harvest during the summer to provide good inexpensive meals during the winter months. Again, the lessons learned in her younger years served her well as she sewed many on the clothes her children wore, stitched quilts for their beds, and decorated the home with crafts. In addition to being a den mother in scouts, she actively volunteered for school projects, helping cook at fund raisers, rode buses as a chaperone, helped with Harvest Festival booths, band solo ensemble, and the March of Dimes. Family always remained at the center of her life. Every Sunday the family visited her parents in Pentwater, where Betty would bring a delicious dish of food for her parents and would mend any of the clothes that needed repair. As a grandmother herself, Betty loved visiting her children and grandchildren, arriving with newly sewn clothes for the grandchildren. Betty was preceded in death by her beloved Milt on February 22, 2008. They had celebrated 66 years together by each other’s side. Along with her husband, Betty was also preceded in death by her parents, her granddaughter Robbi Lynn (McLain) Leftwich, her brother Fred Jobbins, and her sisters Ruth Eyestone and June Isaacson. Betty passed away on Saturday, May 14, 2016 at Spectrum Health Ludington Hospital. She will be greatly missed by her children Milton (Laurie) McLain Jr. of Owosso, Tony (Melissa) McLain of Sault Ste. Marie, Cindy (Gordon) Wyant of Grant, and Lawrence McLain of Scottville, 14 grandchildren, 37 great-grandchildren, 16 great, great-grandchildren, and many nieces and nephews. A Memorial Service will be held for Betty at 11:00 am on Wednesday, June 15 at Wyman Funeral & Cremation Services – Stephens Funeral Home in Scottville. Burial will follow at Brookside Cemetery. Friends may meet with her family for a time of visitation on Wednesday morning from 10:00 – 11:00 am at the funeral home.

Living during the Depression era was one of the most difficult times in American history. Life savings, homes, and jobs were lost in an instant. This time period was also one of the richest times for America as well. Not a time measured by... View Obituary & Service Information

The family of Elizabeth "Betty" McLain created this Life Tributes page to make it easy to share your memories.

Living during the Depression era was one of the most difficult...

Send flowers to the McLain family.