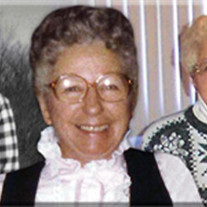 ELLA'S LIFE STORY:Nurturing, caring, and supportive, Ella Mae Taylor was, before all else, a wife and mother (and she had the award to prove it!). Ella Mae devoted her life to caring for those she loved, and always put their needs before her own. She was a loyal friend, always willing to lend a hand or give to those in need. Ella Mae’s kind smile, wonderful sense of humor, and unfailing generosity will live on in the hearts and memories of all those who had the privilege of knowing this remarkable lady.Ella Mae was born in the year of the inauguration of President Herbert Hoover, and the creation of the Popeye comic strip – 1929, the bridge between the Roaring Twenties and the Great Depression. Her proud parents, Frank and Hattie (Wright) Mast, welcomed the newest member of their family into the world on February 6, 1929.Ella Mae grew up in a large family, the eighth of ten children. The Mast family earned a living from their family farm near Hart, Michigan. Sadly, Ella Mae’s father died when she was still young, which soon necessitated a move into town for their family. In order to make ends meet at home, Ella Mae worked at various local factories after attending classes at Hart High School.The years sped by, and before she knew it, Ella Mae had grown into a beautiful and charming young woman. She married the love of her life, Lyle Taylor, on September 29, 1952, in Hart. Lyle hailed from the Ruby Creek area of Mason County, and had two children from his previous marriage. The newlyweds decided to purchase the Ruby Creek Store from Lyle’s sister and built the Ruby Creek Tavern nearby. Ella Mae and Lyle operated both establishments for several years, with their home located at the store. After they made the decision to sell the store, Ella Mae and Lyle moved to Scottville where Ella Mae held various jobs at local businesses including Schramm’s Bakery, Schoenberger’s Grocery Store, Laundryland, and Benow’s Clothing. Eventually, they moved back to the Ruby Creek area. Ella Mae and Lyle were both generous people, and always took the time to help those in need. For example, Ella Mae made lap robes for veterans, and she and Lyle often cut wood for those who needed it.As the years went by, the Taylor family began to grow, and Ella Mae and Lyle were blessed with two more daughters Ginny and Janet. Ella Mae was a wonderful homemaker, and always supportive of her children. She was a talented cook, canner, and baker – the whole family loved coming home to the smell of Ella Mae’s bread baking in the oven. As accomplished at her sewing machine as she was in the kitchen, Ella Mae made much of her daughters’ clothing – sometimes stitching up outfits for their dolls. She enjoyed making quilts, and gave her beautiful creations away to everyone in the family. In the summers, Ella Mae volunteered as the softball coach for daughter Janet’s summer league team. A very caring and supportive mother, Ella Mae was awarded the Carr Settlement “Mother of the Year” in 2003.In 2003, Ella Mae’s beloved companion of more than 50 years passed away on June 4. Ella Mae moved in to Scottville shortly thereafter and became a member of the Scottville United Methodist Church. She was a frequent visitor at the Scottville Area Senior Center, where she loved playing setback with her friends.Ella Mae remained upbeat and positive until her final days, even able to have her doctor laughing as she went into the hospital. After her hospitalization, Ella Mae’s daughters found two loaves of bread she had made for them and put to keep in the freezer before going to the hospital.Humorous, hardworking, and generous, Ella Mae was a devoted wife, a loving mother and grandmother, and a loyal friend. She will be deeply missed and lovingly remembered by her many friends and family members.Ella Mae Taylor’s family includes her children, Ginny (Roger) Beadle of Branch, Janet (John) Husted of Fountain, Karen Taylor of Oklahoma City, OK, and Elliott (Deanna) Taylor of Muskegon; her grandsons, Roger Beadle and his fiancée Angela Gage, Roger (Cindie) Taylor, and Marc Taylor; 7 great-grandchildren; 1 great-great-grandchild; her sister, Marie (Forrest) Burd of Florida; her brother, Stanley (Natalie) Mast of Hart; her sisters-in-law, Jennie Mast of Grand Rapids, Jeannette Mast of Kent City, Marjorie Cole of Hersey, Bessie Stolcenberg of Ludington, and Edna “Chic” Payne of Ludington; her brother-in-law, Marvin (Pat) Taylor of Scottville; and numerous nieces and nephews. Along with her husband, Lyle, she was also preceded in death by her parents; her brothers, John, Henry, Paul, Robert, and Frank Mast; and her sisters, Edna Harlow, and Helen Rudis.Funeral services will be held for Ella Mae at 11 a.m. on Friday, May 31, at the Scottville United Methodist Church, with her pastor, Rev. Jack Conklin officiating. Burial will take place at Brookside Cemetery in Scottville. Friends may meet with her family for a time of visitation on Thursday evening from 5 to 8 p.m. at the Stephens Funeral Home in Scottville, and on Friday morning from 10 a.m. until the time of services at the church. Those who wish to make memorial contributions are asked to consider the Scottville United Methodist Church, or the Scottville Area Senior Center.

ELLA'S LIFE STORY:Nurturing, caring, and supportive, Ella Mae Taylor was, before all else, a wife and mother (and she had the award to prove it!). Ella Mae devoted her life to caring for those she loved, and always put their needs before her... View Obituary & Service Information

The family of Ella Mae Taylor created this Life Tributes page to make it easy to share your memories.

Send flowers to the Taylor family.