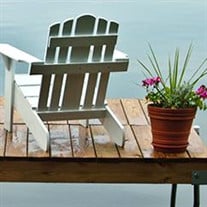 Ethyl M. Bonser aged 92 of Ludington died on Friday, April 28, 2017 at Tendercare of Ludington. She was born Ethel Meriam Bastlin on February 11, 1925 in Berwyn, Illinois to Leo Miller and Jessie (Thorenfelth) Bastlin and graduated from J. Sterling Morton High School in Cicero, Illinois in 1943. Her patriotism for her country was evident as she worked in a factory during World War II making bullets for the war effort. Following the death of her father in 1943, Ethyl moved to Ludington in 1947 with her mother and brothers Fred and Leo. On September 10, 1947, she married John Taylor (Jack) Bonser in Ludington and he preceded her in death on December 2, 2015. Ethyl was also preceded in death by her infant son Kim Evan Bonser, and her brothers Frederick, Richard, and Leo Bastlin. Ethyl served as the bookkeeper for the family business, Bonser's Supermarkets in Ludington for many years and loved animals and music. She also enjoyed bowling in the Lincoln Hills Ladies league at 1 Lucky Strike Lanes, and in 1968 was recognized for bowling a 208 game, 99 pins over her average while using an eight-pound ball. Ethyl will be lovingly remembered by her children Dale Bonser, Cindy (Fred) Reader IV, and Rhonda Bonser all of Ludington; her grandchildren Amanda (Michael) Ferwerda of Kaleva, David Jaskulski of Orlando, Florida, Fred (Kathleen) Reader V, Jillian (William) Hagerty, Mickey (Tracy) Shimel of Scottville, John (Racheal Jolly) Shimel of Ludington; her great-grandchildren Anna Ferwerda, Teegan Shimel, Amari Rivera, Grayson Bentz, Amelia Shimel, and Tayten Jolly. She will also be missed by her sisters Evelyne Houdek and June Normoyle both of California, her nieces and nephews Alan Bonser, Susan Hansen, Roberta Boyd, Laurie, Linda, Marcia, Judy, Jennifer, and Stephen. Private Family services will be held at a later date and burial will take place at Brookside Cemetery in Scottville. Those who wish to remember Ethyl with a memorial donation are asked to consider Lakeshore Animal Friends.

The family of Ethyl M. Bonser created this Life Tributes page to make it easy to share your memories.

Send flowers to the Bonser family.