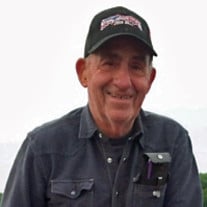 Eugene Edwin "Gene" Miston Sr. aged 87 of Fountain passed away on Monday, February 18, 2019. Gene was born on June 7, 1931 in Benton Harbor, the son of Claude and Mildred (Lehman) Miston and served his country during the Korean Conflict with the United States Navy. On September 23, 1954 he married Lavonda Young in Fennville and they have celebrated 64 years together. Following his service, Gene returned to the Benton Harbor area where he served as a Firefighter for Benton Harbor for over 25 years, retiring in 1979 as a Lieutenant. Gene loved to work on and repair small engines so he started Miston Mower Service in Benton Harbor following his retirement, a service his brother still operates today. Following their move up north to Mason County, Gene was able to enjoy his love of fishing and hunting while still finding time to tinker with small engine repair, odd jobs, and gardening. He always looked for ways to help a friend and truly enjoyed life to its fullest. His greatest love was reserved for his family; especially the grandkids who he like to take for rides on his pontoon boat called "the Ark." Gene was preceded in death by his parents and his siblings Robert Miston, Barbara Kent, and Carol Ann Atwood. He will be greatly missed by his beloved wife Lavonda, his sons Eugene Jr. and wife Shannan of Branch, Michael and wife Connie of Stevensville, and Kenneth also of Stevensville; his grandchildren Eugene III, Ryan, Keri, Zachary, and Kayla; his sister Joan Lichnerowicz and brother Carl Miston both of Hartford, and several nieces and nephews. Funeral services will be held for Gene at 10:00 am on Monday, February 25 at the Bachelor Evangelical Covenant Church in Fountain. Graveside services will be held at 3:00 pm on Monday at North Shores Memory Gardens in Coloma. Friends may meet with his family for a time of visitation on Sunday evening from 6:00 - 8:00 pm at Wyman Funeral & Cremation Services in Scottville. Those who wish to make a memorial donation are asked to make them to Gene's family for future consideration.

Eugene Edwin "Gene" Miston Sr. aged 87 of Fountain passed away on Monday, February 18, 2019. Gene was born on June 7, 1931 in Benton Harbor, the son of Claude and Mildred (Lehman) Miston and served his country during the Korean Conflict with... View Obituary & Service Information

The family of Eugene Edwin Miston, Sr. created this Life Tributes page to make it easy to share your memories.

Send flowers to the Miston family.