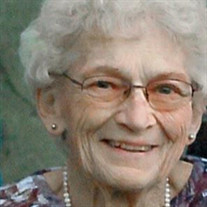 Evelyn Mae Davidson aged 86 of Baldwin passed away on Thursday, May 28, 2020 at her home. Evelyn was born on March 3, 1934 in New Carlisle, Indiana, the daughter of Ernest and Ruth (Hensell) Meyers. On June 13, 1953 she married the love of her life, Robert D. “Bob” Davidson, and they celebrated 62 years together before Bob preceded her in death in 2015. Bob and Evelyn raised four children in Buchanan, Michigan before moving to Baldwin in 1975. Together they owned and operated the Pines Motel, Baldwin Creek Motel, Pines Canoe Livery, Pines Campground, and Pines Fur Company. Their business brought them many happy memories and great friendships. Evelyn leaves behind to mourn her passing her daughter Janice (Mike) Ferris of Buchanan, son Robert (Dennine) Davidson Jr. of Baldwin, daughter Betty (Ken) Curtice Sr. of Bitely, and daughter Jody (Dan) Manion of Paris, Michigan. Evelyn will also be missed by five grandchildren and ten great-grandchildren: Beth (David) Krogel and children Hope, John, and Gabriel of Decatur, Michigan, Ken Curtice Jr. and children Myranda and Kendra of Montana, Kyla (Scott) MacDougall and children Reece, Ray, and Graham of Branch, Trisha (Josh) Zelinski and children Silvio and Adaline of Traverse City, and Nicholas Manion of Paris, Michigan; two great, great-grandsons Aiden and Lucas; her brother Carl (Shelby) Meyers of Florida; her sisters-in-law Joanne Davidson of Albuquerque, NM, and Jackie (Bonnie Gross) Davidson of Santa Fe, NM; and her special friend and caregiver Fonda Summers of Baldwin. Along with her husband Bob, Evelyn was preceded in death by her parents Ernest and Ruth Meyers, and her sister Gladys Morse. Family services will be held on Tuesday, June 2nd at Wyman Funeral & Cremation Services in Scottville with burial following next to her beloved Bob at Evergreen Cemetery in Branch. Those who would like to remember Evelyn with a memorial donation are asked to consider Heartland Hospice, 1053 W Main St, Fremont, MI 49412. Please visit Evelyn’s memory page at www.wymanfuneralservice.com to leave a tribute or memory of Evelyn for her family, or to light a candle in her memory.

Evelyn Mae Davidson aged 86 of Baldwin passed away on Thursday, May 28, 2020 at her home. Evelyn was born on March 3, 1934 in New Carlisle, Indiana, the daughter of Ernest and Ruth (Hensell) Meyers. On June 13, 1953 she married the love of... View Obituary & Service Information

The family of Evelyn Mae Davidson created this Life Tributes page to make it easy to share your memories.

Evelyn Mae Davidson aged 86 of Baldwin passed away on Thursday,...

Send flowers to the Davidson family.