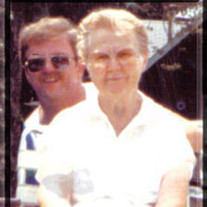 OBITUARY:Mrs. Evelyn M. Porter, aged 95 of Scottville, passed away on Thursday, June 17, 2010 at Oakview Medical Care Facility in Ludington. Evelyn was born in Luther, Michigan on October 18, 1914, the youngest of nine children of Bert & Edith Anderson. She grew up on the family farm in Luther where they raised crops and a dairy herd. She attended, and graduated as salutatorian, from Luther Architectural School in 1933. For a time she lived with her sister, Esther, in Traverse City, then attended Business School in Kalamazoo. On May 15, 1937 in Wayne, MI, she married Donald Porter, a young man whom she had met in high school. They celebrated 43 years together until Don passed away on July 9, 1980. During the war years, Evelyn worked at Woodall’s and the young couple lived in Centerline. In 1945 they moved to Scottville and not long after their move, Evelyn and Don were blessed by the birth of their son Donald. They owned Porter’s Restaurant in downtown Scottville, as well as a resort on Crystal Lake. Evelyn was also employed at Star Watch Case for a time. Evelyn was a dependable, hard working woman with a very practical sense of quality and worth. She loved her garden and raised every imaginable variety of vegetable that she could use to provide for their meals. She was a wonderful cook, passing on the love of a good family meal. Evelyn loved to care for her home, always busy working on various projects that made their home a special place to be. Growing up in a large family during a difficult time helped her to develop the knack for always making the most of what she had and her insistence on quality and common sense. She provided a strong foundation for her family.Evelyn was preceded in death by her parents; her sisters Selma Anderson, Jennie Myers, Esther Acker and Mabel Myers; her brothers Edward, Albert, Henry and Harry Anderson; and her beloved husband Donald.She will be lovingly remembered by her son Donald and his wife Robin of Luther; her grandchildren Scott (Lori) Porter, and Michelle (Mike) Sage; ten great grandchildren, and many nieces and nephews, including LaVonne Groesser, Jane Bates and Yvonne Olsen, whose support and love were so appreciated. She also will be remembered by her wonderful caregiver, Diana Engfer, whose faithful care and companionship have endeared her to Evelyn’s family.Funeral services for Evelyn will be held at 1:00 PM on Thursday, June 24, 2010 at Stephens Funeral Home in Scottville, with Rev. Kenneth Simmons of Fellowship Baptist Church of Luther officiating. Her family will meet with friends on Thursday from Noon until the time of the service. Interment will take place at Pleasant Hill Cemetery in Luther.

The family of Evelyn M Porter created this Life Tributes page to make it easy to share your memories.

Send flowers to the Porter family.