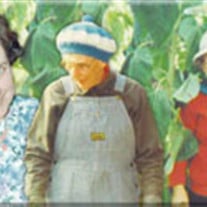 FLORENCE'S LIFE STORY:If life were a tapestry, the beautiful creation that represents the life of Florence Fuller would be woven with brilliant colors that reflect the extraordinary woman she was each and every day. She was resourceful, inventive,... View Obituary & Service Information

The family of Florence Estelle Fuller created this Life Tributes page to make it easy to share your memories.

Send flowers to the Fuller family.