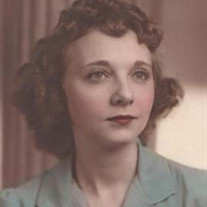 Mrs. Frances Sarah Brennan, aged 84 of Free Soil, formerly of Baldwin, died peacefully at her home on Thursday, March 26, 2009. Frances was born on August 9, 1924 in Washington, D.C. to Ottie and Anna (Connor) Sherwood, and earned her Bachelor’s Degree in Nursing and Administration. While working as a Cadet Nurse in Washington, she had the opportunity to meet Theodore Roosevelt. In 1947, she married Claude Joseph Leland in Washington, and they moved to Wyandotte, MI soon after, where Frances worked at Wyandotte General Hospital. Unfortunately, their marriage ended in 1960. In 1965, Frances married James Dennis Brennan and they moved to Pontiac, where she worked at Pontiac Osteopathic Hospital until moving to Baldwin in 1969. Frances worked at the Baldwin Health Center, and helped start the Grand Oaks Nursing Home, serving as Director of Nursing and Administrator. Frances moved to Mason County in 1998, where she worked at Baywood (Tendercare) Nursing home until her retirement in 2000. She was preceded in death by her husband James in 1998. Frances was also preceded in death by her 1st husband Claude, and her precious daughter Claudia Ann Wahall in February, 1969. She enjoyed animals of all kinds, attending Opera, Ballet, and theatrical plays, often at Ramada Inn. She loved spending as much time as possible with her beloved children and grandchildren. She was always there for her family, and the goodness and love she left behind will always be with them. Frances will be lovingly remembered by her children Christopher Joseph Leland and his wife Elaine of Eugene, Oregon, Nicholas Fredrick Leland and his wife Kristina Lloyd of California, Jeannetta Roberts and her husband Phillip of Free Soil and her former daughter-in-law Leslie Leland of Portland, Oregon; her grandchildren Hannah Leland, Brett (Heather) Leland, Lynette Roberts, Phillip Roberts Jr., Michael Roberts, and Miles David Roberts.

The family of Frances Sarah Brennan created this Life Tributes page to make it easy to share your memories.

Send flowers to the Brennan family.