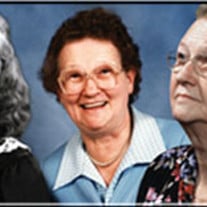 FRANCES' LIFE STORY:Like a vibrant sunrise splashed across the sky, Frances “Wilma” Zygutis brought true beauty and warmth to the world around her. She enjoyed being social and was a friend to many. Frances possessed a vibrant faith that was a constant presence throughout the peaks and valleys of her life. A giving and compassionate woman, Frances thought nothing of putting the needs of others ahead of her own as generosity was a trait that came naturally to her. A loving wife, devoted mother, and kind-hearted woman, Frances leaves behind a beautiful mosaic of memories that will live on in the hearts and lives of those she leaves behind.Nestled within a vibrant decade, the year 1923 was one of great and exciting changes in America. Times were good as jobs were plentiful and new opportunities continued to present themselves. There was much to celebrate during this year for the family of Miles and Gertrude (Hoffman) VanOrman as well. On January 28th they welcomed their daughter, Frances Louise, into their hearts and home. Born in Muskegon, Michigan, Frances was the youngest of seven children. Her father worked as a musician in Muskegon, but he died when Frances was only two years old and her mother never remarried. Wilma, as Frances was often known, attended local schools and graduated from Muskegon High School as part of the class of 1941. She was a devoted daughter and continued to live with her mother until her mother’s death.In order to support herself, Frances worked as a postal telegraph operator for a time, and later found work as an accountant at Continental Motors. It was her work at Continental Motors that would set the stage for the birth of a love story between Frances and the man with whom she would spend the majority of her life. His name was Walter Zygutis and he also worked at Continental. Whenever he saw her he greeted her with a smile and a quick, “Hey Continental,” and they soon had their first date at the Allegan County Fair. Their relationship continued to grow and become more serious, and on April 22, 1960, the couple married in Muskegon. One of the greatest joys in the young couple’s life was welcoming their daughter, Pamela, into their family. Walter also had a daughter, Sharon, who lived in California with his sister and over the years, Frances developed a relationship with Sharon as well, and the two became close. Frances and Walter lived in Muskegon throughout the majority of their married life, but they moved to their farm property on Round Lake in Fountain following Walter’s retirement from Continental. This was an ideal location for them since they were closer to Pam and were also able to enjoy the benefits of lakeside living. They loved fishing on their own pond and also on Round Lake, and Frances had the room to satiate her love of gardening. She enjoyed not only gardening, but also canning as much as she could of her yield, a practice she kept up even this past year. Many enjoyable hours were spent with her gardening buddy, Clare Brasseur. There were many things Frances enjoyed as the years passed. She attended Bachelor Evangelical Covenant Church and was a member of the secret sister’s group that met every month for socializing and craft activities. Socializing was something Frances loved whether it was through an organization, visiting with friends and neighbors, or entertaining. She especially enjoyed going to Scottville Clown Band concerts with her friends Becky Jo and Janie. She loved to be active and was always looking for ways to help others. She supported the “Our Wish” program which helps care for, spay and neuter homeless dogs and cats, a true animal lover at heart. Frances treasured her beloved Shar Pei, Wrinkles, and she also helped one of her cows give birth not long ago. With a life that spanned times of war and times of peace, times of plenty and times of want, Frances Zygutis lived a long and rewarding life full of fun times, unconditional love, and abiding faith. She was a special woman who was felt by others to be just as sweet as they come. Frances was usually one to be active, even into the sunset of her life, and she generously gave to those around her as well. An irreplaceable gift to those around her, Frances will be dearly missed and fondly remembered.Frances Louise "Wilma" Zygutis passed away on Sunday, October 31, 2010 at Memorial Medical Center in Ludington. She was preceded in death by her brothers Miles, Douglas, Clarence, and Harold VanOrman; and her sisters Doris Turner, and Lillian VanOrman. Frances will be greatly missed by her daughters Pamela Zygutis and her friend Mike Traeger of Fountain, and Sharon Myers and her friend James Johnstone of Livermore, California; her brother-in-law Leland Davis of Muskegon; her sister-in-law Ann Ross of California; her gardening buddy Clare Brasseur of Scottville; and several special nieces and nephews. A Memorial Service will be held for Frances at 11:00 AM on Saturday, November 13 at the Stephens Funeral Home in Scottville, with Pastor Leo Anderson of Bachelor Evangelical Covenant Church officiating. Burial will take place at Bachelor Cemetery. Friends may meet with her family for a time of visitation on Saturday, Nov. 13 from 10:00 AM until time of services at the funeral home. Those who wish to make a memorial contribution are asked to consider the Bachelor Church Building Fund, or her family.

FRANCES' LIFE STORY:Like a vibrant sunrise splashed across the sky, Frances &#8220;Wilma&#8221; Zygutis brought true beauty and warmth to the world around her. She enjoyed being social and was a friend to many. Frances possessed a vibrant faith... View Obituary & Service Information

The family of Frances Louise Zygutis created this Life Tributes page to make it easy to share your memories.

FRANCES&#39; LIFE STORY:Like a vibrant sunrise splashed across the...

Send flowers to the Zygutis family.