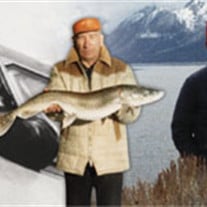 Frank Dombrouski was a man of great strength with a loving and humble heart. Frank was a fisherman through and through and it was no secret that he viewed his beloved June as his &#8220;best catch.&#8221; He treasured each day as a precious... View Obituary & Service Information

The family of Frank Dombrouski created this Life Tributes page to make it easy to share your memories.

Frank Dombrouski was a man of great strength with a loving and...

Send flowers to the Dombrouski family.